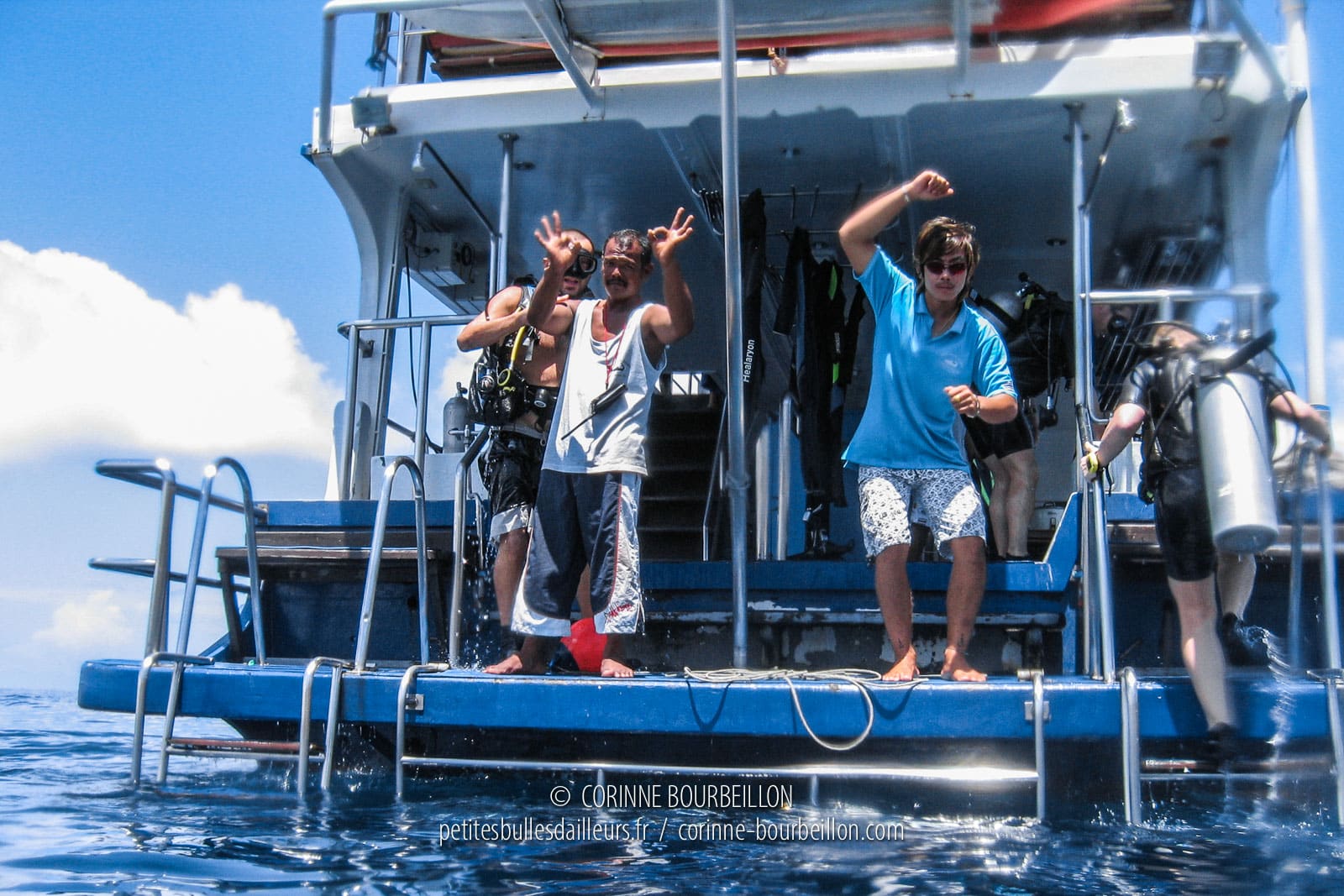 It's all right! Back to the Sea of Fantasy, the boat of Eden Divers. (Similan Islands, Thailand, February 2009)

The cruise makes bubbles at Similan

I have just returned from a four-day dive cruise to the fabulous Similan Islands in the Andaman Sea, Thailand. Here are some pictures, above and underwater.

To begin, a few pictures of this fabulous beach of the island called "number 8" of the Similan, where we stopped between two dives.

Nothing has changed since my passage from three years ago.

The same white sand, as fine as flour, the same translucent waves, the same azure bay that can be admired from above, from the big round rocks on which one climbs by clinging to ropes, with wooden footbridges between two blocks of granite.

Atmosphere on board the Sea of Fantasy

For the rest, comfortable boat and great atmosphere! I'm aboard the Sea of Fantasyof the company Eden Divers. I have my single cabin and my diving companions are nice people, easy to live with. No contingent of Germans, but on the contrary a completely international clientele.

We are thirteen divers clients, there are three guides, a videographer, six crew members and an Eden Divers manager on board. In all, thirteen nationalities: three French, including me, one Canadian, two Japanese, two Australians, one American, two Slovaks, two Swedes, one Turkish, one German, one Israeli, one South African, one Swiss and the Thai, of course.

No cannonballs on board, only nice people!

But for everything to be perfect, the mantas and whale sharks would have had to be there. We hoped for them. Very much so. But none of the big beasts appeared in the blue... So I will have to come back on a future trip to see them! 😉

I realize how lucky I was, three years ago, to meet both underwater ...

Whatever. The dives were excellent anyway, and I consoled myself with a bunch of other critters, including the inevitable nudibranchs (sea slugs) that I love so much...

Unfortunately, my small Canon (Powershot A95)who had been quaking for some time, let me go for good on the second day. I tried everything to revive him: hot, cold, pats, prayers to Buddha, disassembly with a rusty screwdriver ... In vain.

But I was lucky in my misfortune. The Turkish dive-master kindly lent me her small Powershot S30 with its housing so that I could continue to make pictures.

I admit, the aircraft was not very good, less efficient than my A95. But it was better than nothing. And I still managed to take some nice pictures.

I come back enchanted from these four days of diving, sea and sun.

Ah, the joys of Thai pick-up trucks with uncertain schedules! Until the last minute, you can never be too sure that the expected taxi/bus/minivan will arrive... Usually, it always ends up showing up. Never quite at the announced time.

Go. Tomorrow, go to Koh Lipe! And I will find the way to take photos anyway. Promised!

Added on 13/04/2009: below, two links to complete this post.
→ My pictures of the Similan
→ Video of the crossed turtle in East of Eden