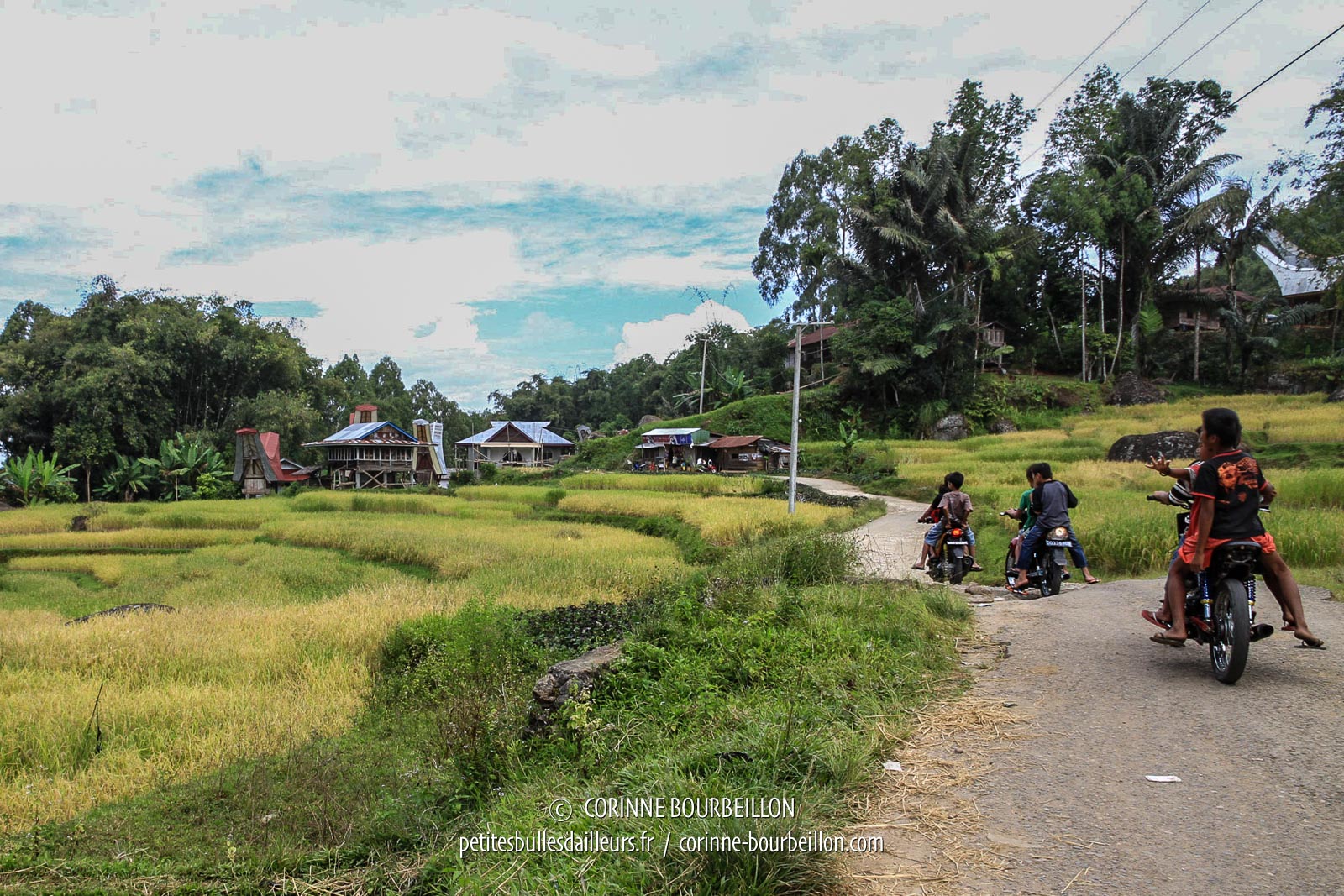 Kids scooter on the road in front of me. (Toraja Country, Sulawesi, Indonesia, July 2010)

Scooter in the rice fields

Batutumonga. This strange and beautiful name is synonymous for me, a fantastic scooter ride in the heart of Toraja country, in central Sulawesi. Rice fields sublime ... but rotten roads! I almost stayed in the mountains sleeping because of a flat tire.


The rice fields of Batutumonga

The Batutumonga region is a mountainous area covered with rice paddies. Each turn of the road offers a stunning new panorama. If there is a corner not to be missed, in the Toraja Country, it is this one!

During my previous stay in Sulawesi, three years agoI had already offered the ride. I wanted to do it again last July.

Easy. In my bag, before riding the rental bike, I slip maps of the region, recovered from my previous trip.

Finally ... "cards" is a big word: simple A4 sheets photocopied and distributed to tourists. Between a continuous line and a dotted line, it is difficult to know which path is really practicable for a two-wheeler.

Suddenly, I meet with my motorcycle rental: which is the best way to make a loop and return to Rantepao without galley? Three years agothe return route had been difficult. Not want to redo this long and tortuous journey by broken roads.

On one of the cards that I give him, he shows me the "good" road with a blue line of ballpoint pen. He also scribbles me the name of a village, if I have to ask my way. With his fingertip, he also shows me the dotted lines of the "bad" road ... Very bad roadhe says.

Perfect. Thank you so much, terima kasih baniak…

I go on the road to Bori. A small paved road, with some potholes and tarpaulins spread where the rice dries in the sun. A pretty picturesque road, borrowed the day before to go to the funeral ceremony. Moreover, the party continues in Bori. On site, we continue to cut the buffaloes.

This time, I cross the village without stopping and continue north. From time to time, I stop to photograph the work of the fields.

It climbs little by little. But the road is always a real road. It's the right road, no problem. Besides, I recognize everything.

I find this fabulous point of view, where everyone stops for the photo-souvenir, where the eyes are far away on the rice terraces and tiny villages, with their graceful roofs tongkonan curved. I still stop, a little further, in this beautiful valley, which I am so happy to see again ... Rice fields, still strewn with big black and round rocks encased in the tender green of the cultures. Superb!

I have lunch up there, in Batutumonga itself, at the panoramic restaurant where all the tourists land. The ride is a classic circuit around Rantepao. But there are not many in the huge hall. A young couple came to scooter, like me. And two other young people with a local guide.

Now, I still have the choice: go back where I came from. Or return to Rantepao following the blue line of the ballpoint pen.

Of course, this is the second option that tempts me. Of course, to spin my nose in the wind, from village to village, to stop everywhere for new photos, to leave without calculating too much distances, I miss the junction where I should have turned.

I see that the road is less and less a road and more and more full of stones, holes, muddy puddles. I can see the big gray cloud in my back, which is swelling and getting closer. I even recognize very well two-three villages and all these landscapes that had subjugated me, three years earlier, on this rotten road that I had sworn not to resume.

When I see a new handful of houses come up, I finally decide to ask my way to a young girl, who comes home hastily.

It tells me vaguely the direction in which I go. She speaks very poor English and my skinny Bahasa is not enough. Of course, I left the guesthouse my little conversation book.

Suddenly, it is dark and it rains dru. She invites me to come and take shelter under the veranda. Beckons me to push my bike under the eaves. It's the deluge.

A smiling lady, whom I suppose to be her mother, has already taken out a chair, invites me to sit down. Kopi? Well, a coffee, it's not a refusal, given what falls ... As much as it goes.

In the doorway, young children, two little boys and two little girls come to watch me, a little intimidated. As soon as I look at them, they take refuge inside and chuckle with laughter.

The girl is called Omi. An angel. I thought I could leave again after kopi, the short story of my life as a tourist in three words Bahasa, the photos with her nieces and her brother, the promise to become her friend on Facebook ...

I did 20 meters on the bike, with my rain poncho. And turn around immediately. The rear tire was completely flat.

After inspection of the tire, Omi's brother shakes his head. She turns to me, speaks to me, I catch a few words: tinggal, tidur, di sini... stay, sleep, here. Obviously, I did not take my landlord's phone number. Obviously, the phone of my guesthouse does not answer.

Not possible. I have to take my bus ticket to Rantepao in the evening, if I want to be able to get back to Makassar in time for my flight back to the North, to Manado. I want to repair.

Omi takes my bike, makes me sit behind her, and we drive, in the pebble and holes, despite the flat tire, at low speed, to the semblance of town I had passed, a few kilometers earlier. For nothing.

Tutup! Closed! The repairman of the corner is closed.

She is peeved. And transie.

Omi takes me home. It's raining again a little. All shivering, she parked the bike in front of the house. His mother is waiting for a hypothetical ojek, a guy who rides a motorcycle taxi, who could take me back to Rantepao. Of course, the few who pass are already taken.

The clock is ticking Almost 5 pm in the afternoon. I still have roughly two hours of day left. The night falls early here. As much as I know how to run at slow speed on a rotten road, I do not feel like doing it in the dark.

So I decide. If I have to move, it's now. I saw that we could roll, anyway, with this flat tire. Not fast, but it's moving forward.

I try to estimate the time needed to reach Rantepao. Omi does not know too much, maybe an hour, maybe two, maybe more ... In Indonesia, time is elastic, always.

Pelan, pelan! they tell me when I finally leave, with my rain poncho and flat tire. Slowly, yes, yes. This, yes…

Two o'clock. It took me a little over two hours to reach the outskirts of the city. I arrived at the renter's shop in Rantepao, in the pouring rain. Back and arms stiff, buttocks compote. I swapped my broken bike for a brand new scooter.

Up there, in the mountains, I lived great moments of solitude, under the shower, facing huge gurgling pools, to determine where to go: right, left, in the middle? I crossed them all, without accidental slip, without falling in the yellow mud.

I also made laugh lots of villagers, who went up to the heights, returning home. All began to greet me cheerfully, a little surprised to see a white hooded green astray on this little mountain road drowned in fog. All of them then uttered an exclamation pointing to my wheel.

Stoic, stubborn, I continued, worth it, ultra slow pace. By making me confirm the way, at each junction. What a relief, when I fell, finally, on a real good road hard not too bumpy, which descended in laces to the plain!

It made me a good story to tell the evening to Laurence and Eric, a couple of Lyonnais installed in the same guesthouse as me, with their son Maxence.

They too had rented scooters in the day and they too had burst! More lucky than me, they had unearthed a little repairer nearby, who gave them the wheel in condition ... My story also made fun Sebastian, the Norwegian with whom I had sympathized in the buswhen he returned the day after his trek in the rice fields.

Me, walking, that's not my thing ... I prefer to ride on these small bikes, the equivalent of our scooters, with which everyone moves in Asia. For independence, the freedom it provides. And then, with that we go everywhere. Even with a flat tire.