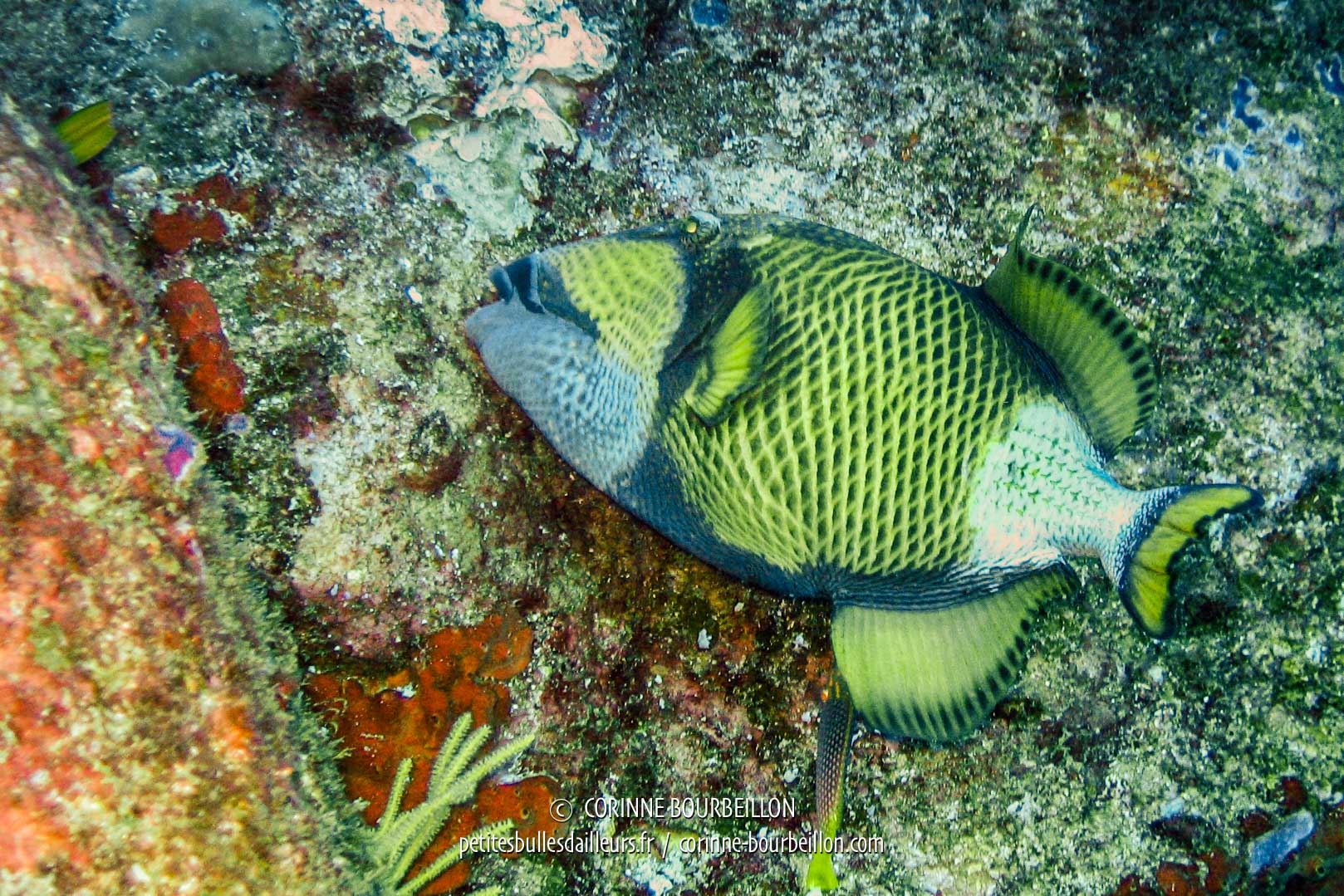 Beware of the ballista!

Everyone is afraid of sharks. This is silly. It's rare that a shark eats man (when the opposite is not the case). In fact, there are much more dangerous for divers: the mustached triggerfish or olive triggerfish, also called titan triggerfish.

A fast and sometimes aggressive fish

Anyone who's ever felt its teeth will remember it forever...

The triggerfish is a fairly large fish (50 to 75 cm long), very fast. It is called trigger-fish in English, because of its caudal fin which is pointed like a trigger when it goes into action.

It is one of the few fish that divers can fear attacks ... with, of course, the fierce clownfish !!!

Admire below the teeth of the beast... And the little cleaning shrimp, perched fearlessly on the tip of its "nose"!

This photo is dated my 2006 trip to the Perhentian Islands, Malaysia. A well behaved ballista like that, the time of the passage to his "cleaning station", it's not so frequent...

Below, shot at Bali in July 2008a short video of the beast, biting the reef to pieces:

Stay away from the "nest".

In fact, it is aggressive after the mating and egg-laying season, when it guards the nest. If approached too closely, the titan triggerfish (usually a female) will attack to chase you out of its territory and will not hesitate to bite with its ugly big rabbit teeth to convince you to run away. And he swims fast, the bugger...

It is therefore better to go around the area, as the triggerfish defines its territory from the bottom to the surface.

The area that the ballista considers its territory is inverted cone or funnel shape (tip starting at the nest). The frequent mistake of divers is to take distance from the top, whereas it is enough to move away by staying at the same depth, preferably facing the beast: one swims vigorously backwards, calmly presenting the fins to it. Thus, if it takes the urge to bite something, it will be the plastic of the fins, rather than the fat of the calf or a finger.

Most of the other triggerfish species that can be found in tropical waters, such as the friendly clown triggerfish, with its white spotted livery, are not aggressive like the titan triggerfish.

It has already happened to me several times during my dives in South-East Asia, to be charged by an angry triggerfish... It is not always easy to spot a nest, which appears as a small crater in the coral debris of the substratum. The first attack is surprising and a bit scary. But the following times, we know what to expect from the behaviour of this fish, and we rush to flee as quickly as possible!

In Koh Tao, in ThailandThe titanic triggerfish have become particularly aggressive because of the high concentration of divers, who disturb them every day. A few years ago, a triggerfish was even nicknamed "Tyson" by local diving instructors. The fish had apparently bitten into a customer's ear... (like boxer Mike Tyson during a fight in 1997, which has since become famous because of this "incident").

Update. But it's not only tropical waters... The triggerfish is rampant as far as France, in the Mediterranean! Attacks and bites attributed to a common triggerfish have been reported by bathers in July 2020. Read → Holidaymakers bitten by a mysterious fish in the Mediterranean Sea: the marine animal has finally been identified