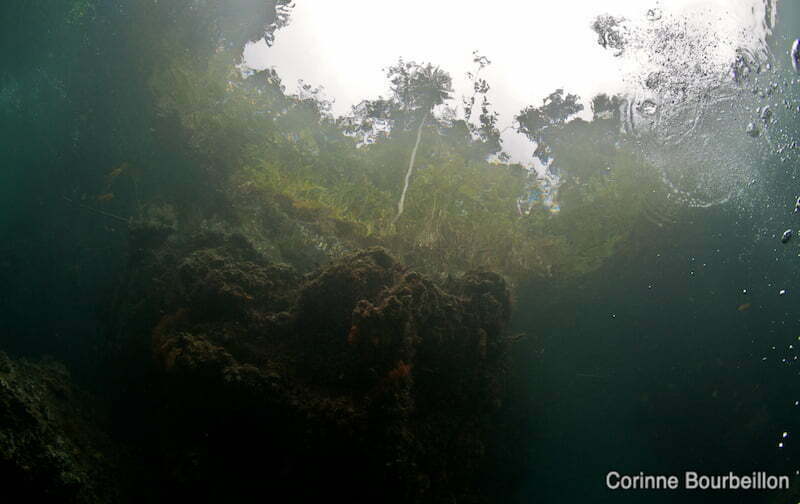 Here, jungle-covered cliffs strangle the sea. This is one of the mythical sites of Raja Ampat: The Passage.

In the wake of Sir Alfred Russel Wallace

West Papua, Indonesia. In the archipelago of Raja Ampat, the islands of Gam and Waigeo almost touch each other. Their karst cliffs covered with jungle, facing each other, form a kind of canyon that winds in the sea, facing east-west.

The Passage is a spectacular and famous place. The British naturalist Sir Alfred Russel Wallace, who was looking for birds of paradise, is the first to have described it, in the nineteenth century, in his book The Malay Archipelago (1869).

Below its journey, on a map of the time, opposite a modern map. The Passage is at the level of the red circle.

For divers, this is a site really different from others. From the boat, it feels as if you are sailing on a deep river. Once underwater, we still have this strange feeling of diving in the river, because of the shallowness, the proximity of the vegetation and the rock. 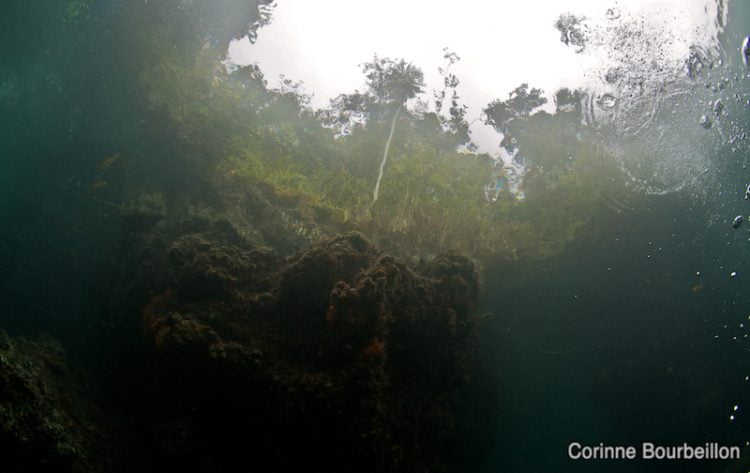 At the same time, the underwater fauna is there. There are sponges, corals, tropical fish that have nothing to do with the bed of a river ...

Underwater, the atmosphere is strange, mesmerizing, between the bright colors of the sea fans at the bottom of the bottleneck and the green light coming from the surface, sifted by the foliage of the trees.

There is something unreal in this underwater walk, between the coral and the vegetation so close, a little like in the blue mangrove which I was talking about in a previous post.

It's funny, when you look up, to see his bubbles that seem to fly straight to the trees ...

The Passage a place well known for the strength of the current. When the tides rush into this narrow gully, no need to fight. We must let ourselves drift. The boat lets go at one end, comes to pick you up at the other. 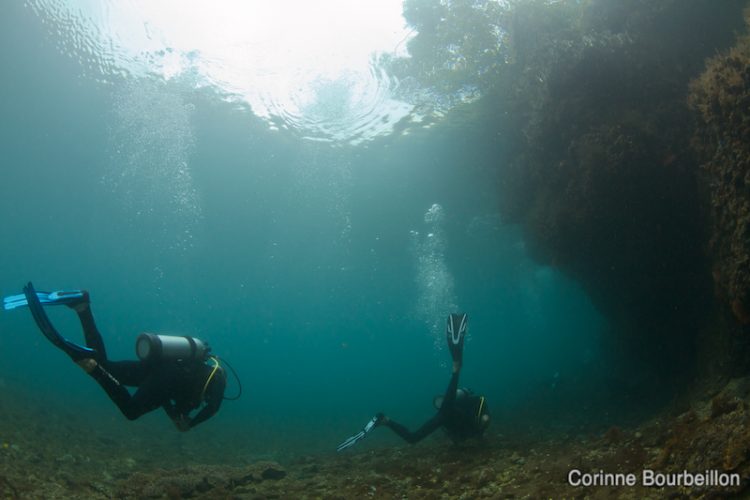 Fortunately, there are elbows, between the two walls of rock, which form underwater coves suddenly peaceful, where the divers can stop for a moment, before leaving like rockets, carried by the powerful flow of the Passage.

Although shallow, it is a dive rich in sensations, really singular, between moments of calm and sudden acceleration.

UPDATE. Small a posteriori addition: I slide below a short video that was made at the GoPro, the day of our little outing. I can be seen vigorously palming with the others in the juice and putting my head upside down with the housing of my 7D to take a picture ...

During this underwater walk, we discover caves, passages in the cliff, from which we can go back to the surface, ghostly tree trunks fallen on the bottom, huge rocks colonized by the subterranean fauna. Marine… 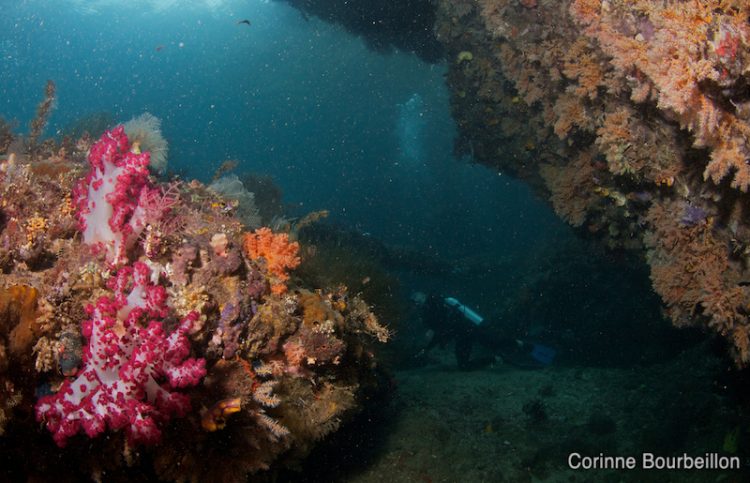 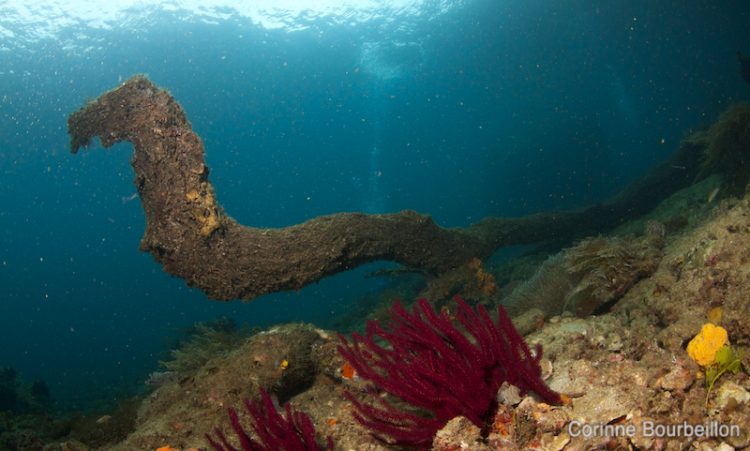 The ideal is to dive at noon, when the sun's rays plunge right under the surface, creating shadows and light.

Bad luck for me: when I was there, the blue morning sky had turned grey, and a huge rain shower greeted us at the exit... As a result, my images are a bit dark, they lack those beautiful rays of light, filtered by the leaves of the trees, to illuminate the background.

But I don't intend to leave it at that. I promised myself I'd go back! 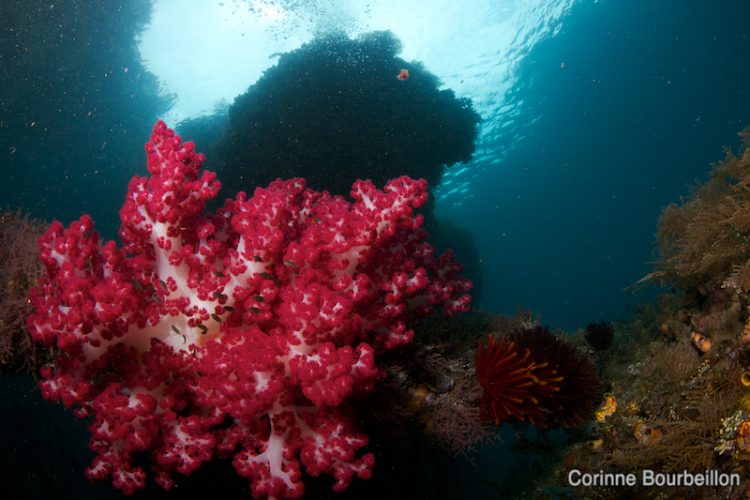 Once back on the boat, we headed to the nearby village for lunch.

Navigation unreal, there again, almost ghostly, like in the middle of nowhere: the islands around us had disappeared, drowned in the grey of the flood.

What is consoling, at these latitudes (we're almost at the equator), is that the rain is warm... It's a change from the Breton drizzle!

Despite the humidity, I decided, with great care, to open the waterproof case of the camera, to swap my wide angle lens for the macro (see → Diving and photo: my equipment) in anticipation of the next dive. Because it's still a shame not to be able to do macro on a site bearing the promising name of Nudibranch Rock ...

This small stop also gave me the opportunity to exhibit my beautiful poncho of rain, if it is, on the pontoon. I even took the pose for the picture.

Guaranteed success with the people and children of the village! 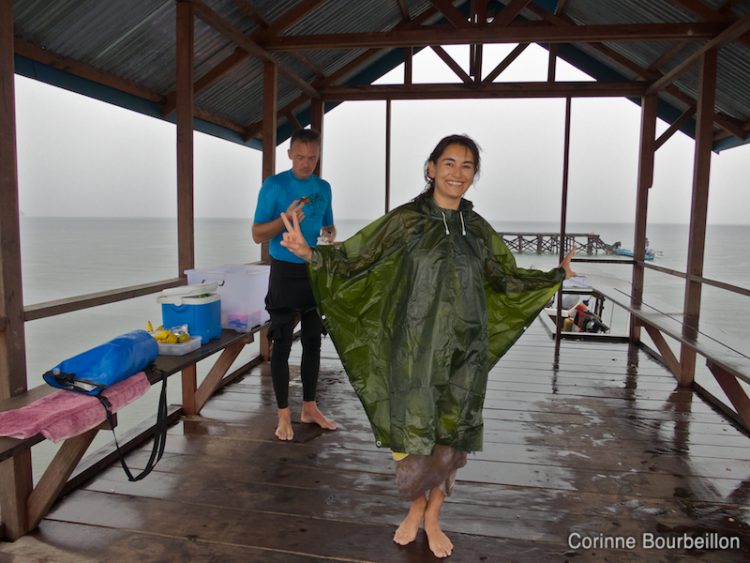 → To see all the articles about my dives at Raja Ampat : a click here !