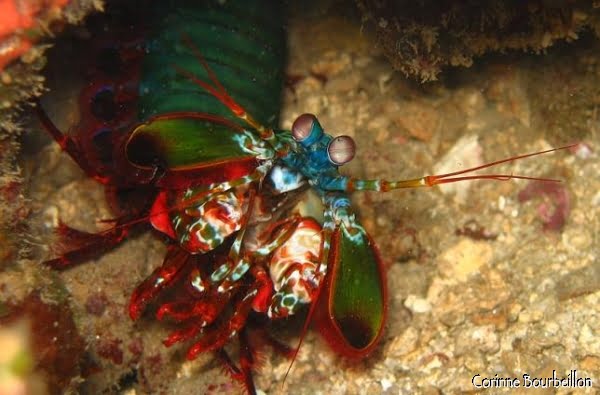 I am reconciled with Lovina Beach ! Thanks to two nice little dives, a traditional ceremony in front of the sea and a splendid sunset.

The Lovina Reef is certainly not spectacular. He suffered from dynamite fishing and warming of the water. But to dip his fins after a few months without diving, it's perfect. 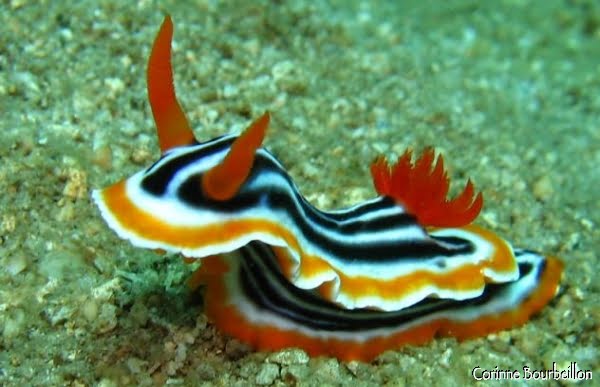 It is a gently sloping reef, with coral clusters and some barrel sponges, which slopes down to a sandy bottom. In addition to the usual tropical fauna (angel fish, butterflies, parrots, etc.) and the numerous lion-fishes, there are also a number of interesting critters. Including a turtle, which crossed our path from a distance during the first dive! 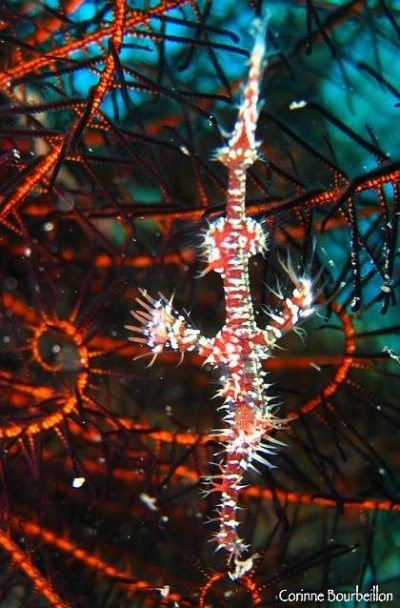 I went out with Spice Miscellaneous, big center installed on the quiet part of the beach, close to my hotel, the Lovina Beach Hotel (not a very original name!), west of Kalibukbuk.

My divemaster guide, a young Balinese from Lovina who calls himself Luxman, finds me two ghost-pipe fishesthese seahorses species with spikes, rather shy, and a few nudibranchs. I have plenty of time to flicker at my ease and adjust my buoyancy, since I am the only customer!

We will make the second outing in the company of a Dutch instructor, Johan, who has even more eye for detail: he will find a beautiful green and fleshy Javanese moray eel, a squid, in the same time. (Manta-shrimp), kind of big green shrimp with globular eyes at once scared and curious. We meet a school of razor fish swimming down the head, another of small catfish grazing the sand.

On the way back, when the boat docked, I saw from afar people gathered on the beach, in front of the dolphin monument. Some seem to move into the water. It's a ceremony, as there are so many in Bali.

Traditional ceremony on the beach

Quickly, I jump out of the boat and I head for them, with my camera still in its box, without even removing my combi, because already people go back to the big tree that borders the square with dolphins. I'm coming to the end. 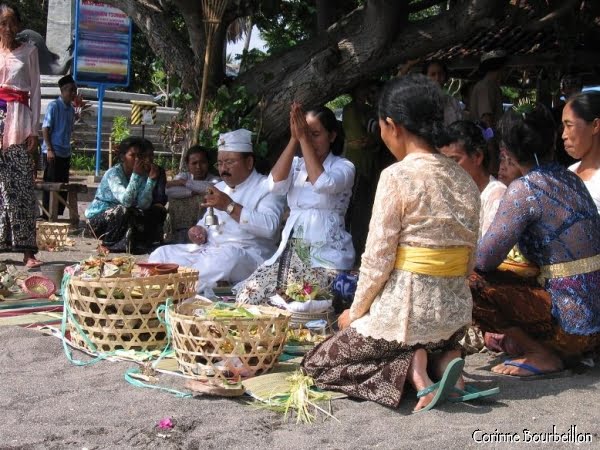 I'm pointing my camera at the people sitting there dressed in sarongs. Everyone looks at me with round eyes, then nods and smiles. I must look funny in my black suit, still wet. I realize that I still have my mask around my neck!

Men are wearing the traditional turban. Women wear openwork embroidered tunics. A guy all in white officiates in the middle of the group and baskets of offerings. He seems to be saying prayers, waving a bell. 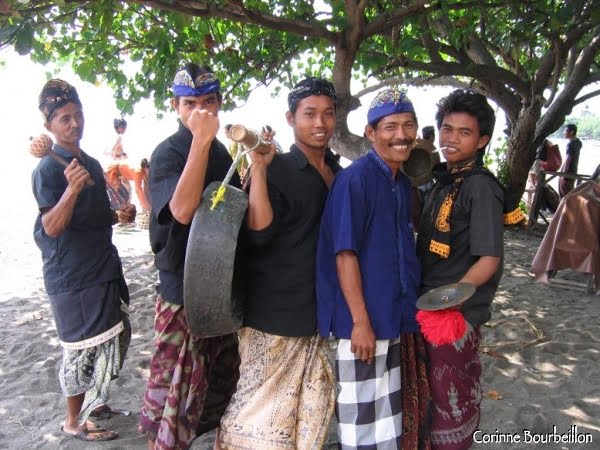 A teenager explains to me in basic English that it's a ceremony for the dead, so that their souls can join the Gods... At the end of the prayer, the guys pose with their sarongs and musical instruments, delighted that I draw their portrait!

Sunset on the beach

I end this very pleasant day sipping a banana lassie on the terrace of Sea Breeze Cafe, facing a splendid sunset. In the shade, a lady eve, sarong around the waist, topless, washes in the sea, old fashioned. This is the small black silhouette that can be seen on the right in the photo. 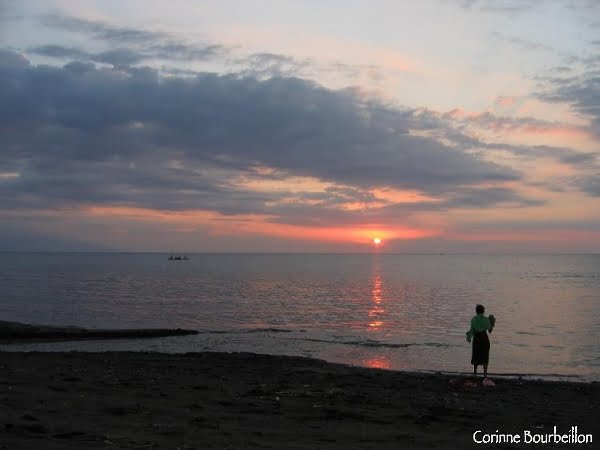 I'm in a good mood tonight: I even made friends with a sarong dealer, who apologised very nicely for constantly coming here with her junk for sale and promised not to bother me any more.

Three buses filled with Javanese, presumably Indonesians from Jakarta, landed for the sunset. Muslims in headscarves are not good customers, they do not buy sarongs, only to eat, complained my new friend, shaking her head with a sorry look. These tourists do very organized tours. We put them down for half an hour on the beach, and hop, once the sun is down, they leave. The girls with arms loaded with collars rushed anyway, to try their luck. "Sunset price! » launches again a seller of souvenir notebooks ... I'm tired.

Tomorrow, I go even further west, to Pemuteran, with Spice Miscellaneous, to dive around Menjangan Island, which I've been told is a wonderland. I plan to stay a few days there. The underwater world is said to be one of the most beautiful in Bali!