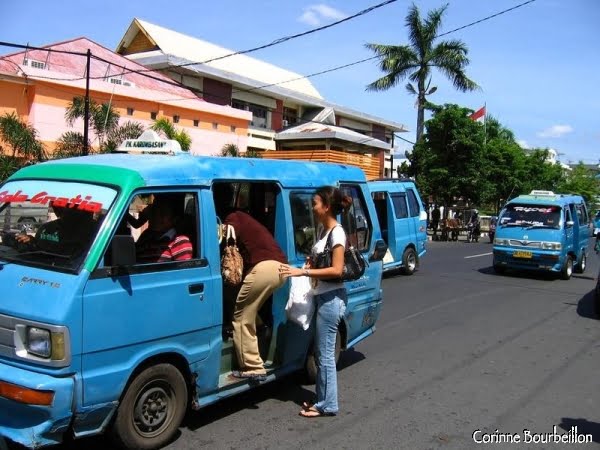 In Manado, everyone moves in "mikrolet".

It is with regret that I leave today my nice bungalow with view of Divers Lodge. At the same time, I am not angry to break with the isolation of the resort, to find "real life and real people". Back to Manado, so, for a day stopover, time to book my plane tickets to Toraja country and to organize my trip to the Togian Islands.

Tomorrow, I go to cool in the nearby mountains, Tomohonat the foot of the volcano Lokon.

I moved to the hotel Minahasa, on the big Sam Ratulangi Boulevard, trusting me Lonely Planet. I was wrong... The "standard" rooms, which are still worth 135 000 Rp (a little more than 10€) without counting the 10% government tax, are old, sad and noisy.

The "deluxe" rooms, small bungalows located in a nice garden at the back, seem much more pleasant, but hey, it's still going to look in the 215 000 Rp (+ the famous 10%) and moreover, they are doing some work in their new building above. Well, well.

Never mind, for one night, I keep my rupees and go for "standard". They kindly invite me to enjoy the brand new swimming pool, except that I don't feel like swimming under the workers' gaze. And then I have much more urgent things to do: go to the travel agency. Star Express, recommended by Christiane, for my airline tickets.

This is where it gets harder. To move to Manado, as everywhere in Indonesia, besides, there are the mikrolets (also called bemos in other corners). Light blue minibuses crisscrossing the streets in an incessant ballet, where you stop where you want with a wave of your hand and you go down where you want.

The trick is to know what mikrolet to take, when we have a very vague idea of the geography of the city ...

The young woman at the hotel reception has written me down on a piece of paper the names of the directions I must take, but I am a little lost. If I understand correctly, I have to go down to a junction, at the end of the boulevard, to the north, to take another mikrolet bound for the terminal. Paal 2... With that, you have to fend for yourself.

Fortunately, passers-by are more than helpful and help me stop a mikrolet going in the right direction. The driver calls shortly after one of his colleagues through the window at a junction invaded by blue minibuses. Wavers me down and up the other.

All right! A few minutes later, this one drops me off right in front of my agency. It's great, the Mikrolets! And cheap: Rp 1700 per race in Manado... not even 15 cents.