The eyes in the blue

Excellent choice, the Perhentian, for a gentle "putting back on the flippers". Shallow dives, generally without too much current. And lots of little critters nice to flicker around with.

Nothing new for me, which is a bit of a "spoiled child" when it comes to diving... But these peaceful underwater walks have allowed me to get my hands on the camera again, while waiting for Sipadan. 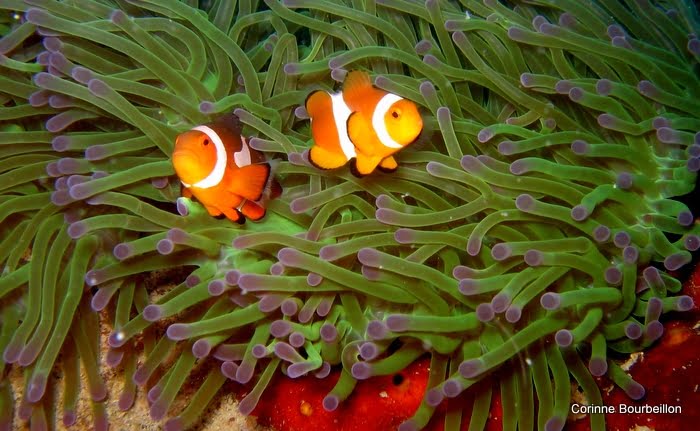 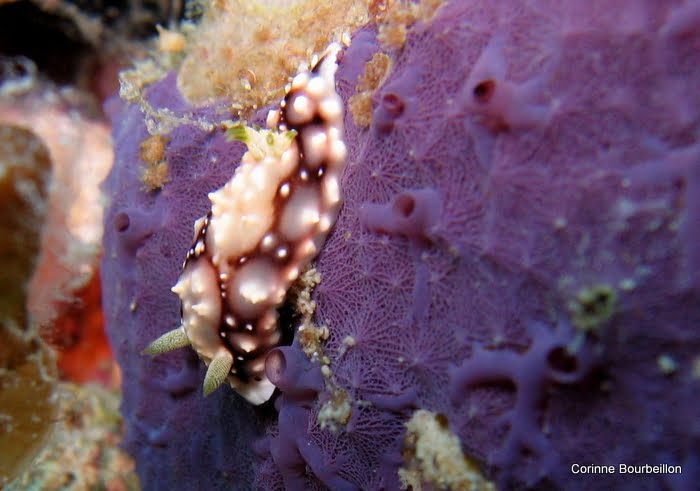 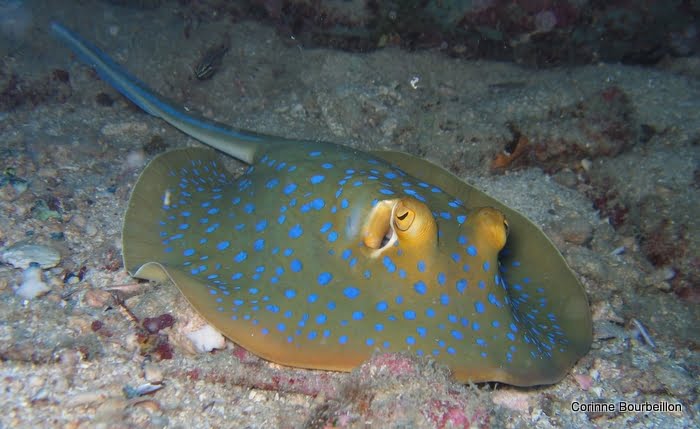 A sea serpent on the boat!

Two "funny" incidents spiced up our outings yesterday. On the programme were two superb wrecks, Fish Heaven, reputed to be "secret", and Sugar Wreck, better known.

When we arrived at the first site, a "knitted-striped" snake came up from the depths, while Anke, the person in charge of the centre Watercolors went to the water to hang our end to the buoy, immersed.

Not intimidated at all, the beast approached the boat, waving on the surface, to better us zurter. Then all of a sudden, the snake snuck into the engine, for a small inspection. He stayed there for a moment, coming out his little head now and again. 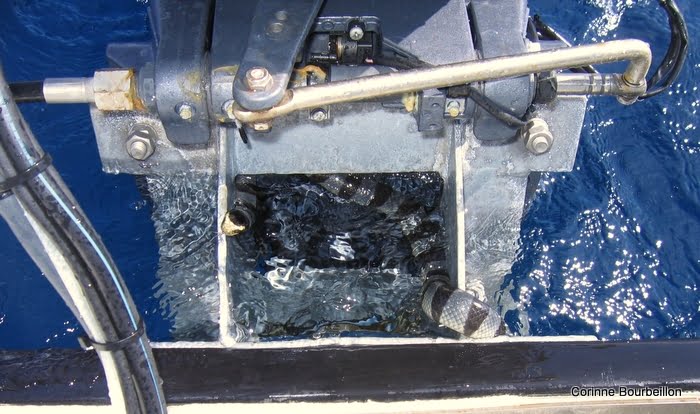 We all rushed to the back of the boat, excited, fearing a bit even when he emboldened himself and decided to get on board. But no, he ended up going back to the water. And we did the same.

I did not know this wreck, nicknamed Fish Heaven. A simple barge returned, but it is spectacular. Literally covered with fish, in so dense banks, that it takes a moment, before distinguishing what is underneath. 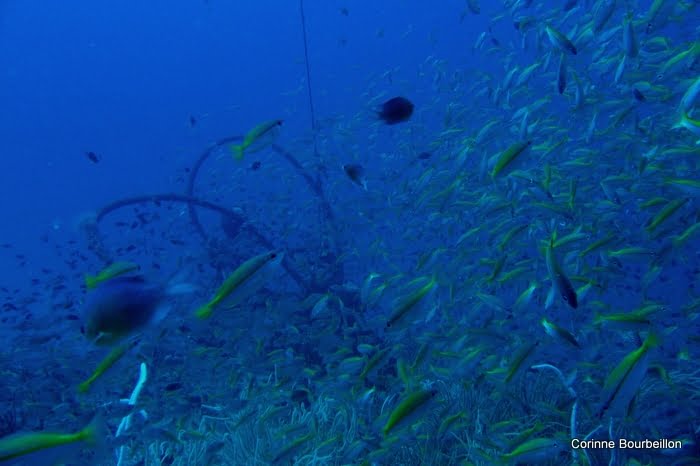 Then we thought we were going directly to the second site ... It was without counting on the zealous cops of the sea, who appeared in their big black canoe, marked POLIS, screaming siren, beckoning us to stop.

I'm sorry I could not take pictures up close, but the guys were not too engaging and beckoned me to tidy up my camera (while they did not feel deprived, on their side, of strafe our boat and girls in jerseys, from all angles).

There were ten of them, all dressed in black, including their lifejackets, which made them look like Robocop. Papers please ...

Only here is, our boat, he didn't have his papers (new boat or almost new, paperwork in progress). Result: we had to return to the dive center under good escort, disembark and re-embark in two smaller motor boats. This little forced return trip took up a good part of the afternoon...

Mike, the Malaysian responsible for Watercolors with Anke came to talk, in his nice orange life jacket, and he even got away without a fine, because he and the chief of police had the same initials... Sic! 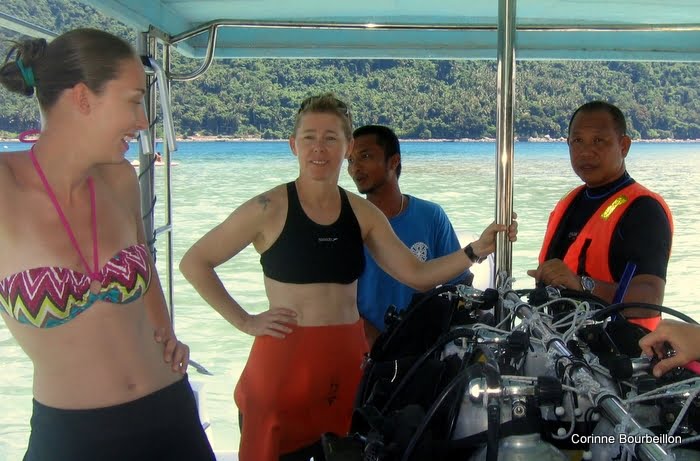 The bottom line is that we were able to dive on Sugar Wreck anyway.

Visi was rotten, alas, when we went down. But Sugar Wreck, whatever the conditions, remains a dive full of atmosphere.

In spite of the "snow" that scatters the photos, I managed to shoot some bugs. Star balloon fish, flying scorpion fish. 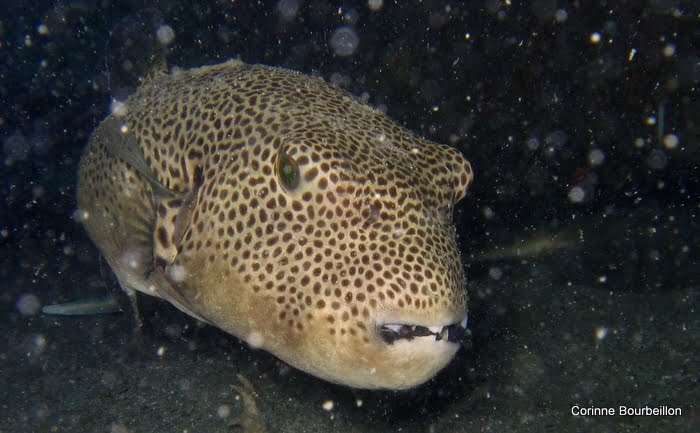 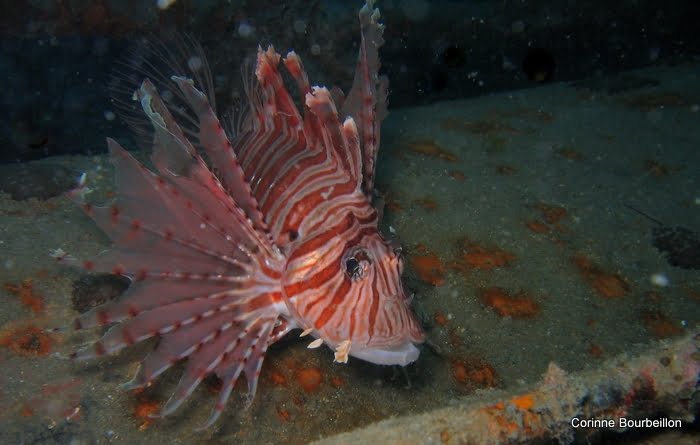 At the end of the dive, when we are at the landing, in the blue, the batfish flutter around our small group, for a final salute.

It's so good to be underwater again!