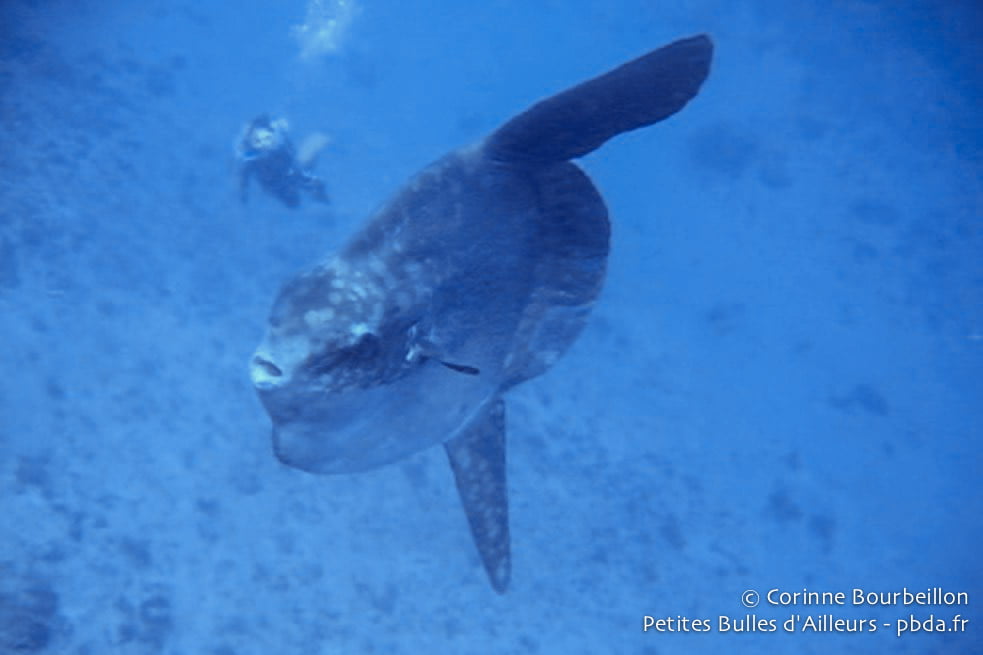 I swam with a mola-mola

It is a big beast, really huge, in the two-three meter span, from one end to the other of each fin (upper and lower). A Baltic fish, so, and not too shy, despite the dozens of divers to turn around in a string of bubbles.

However, at the beginning of the dive, I am not very optimistic. We go along, as the previous times, the falling, right hand. A little surf, but the current is manageable. We'll wait a few minutes in the blue, where the reef becomes a wall. But nothing.

Good. U-turn, pulling edges, because of the surf.

I scan the reef, now to my left, looking for possible smaller bugs, to flash. Some common nudibranchs, the usual tropical fauna ... I still glances to the blue, right, just in case.

And then the divers in front of me start to get excited, while the "ding-ding" of those who bang on their tanks begins to ring out.

No doubt, so much excitement means: "Mola-mola in sight! "Wayan and Made, our dive masters, turn towards me, waving their hand, fist closed, thumb and little finger outstretched. This is the sign for the molas-molas. Peter, a German instructor who has been my buddy for several dives, is looking at me with his eyes wide open. I understood well. 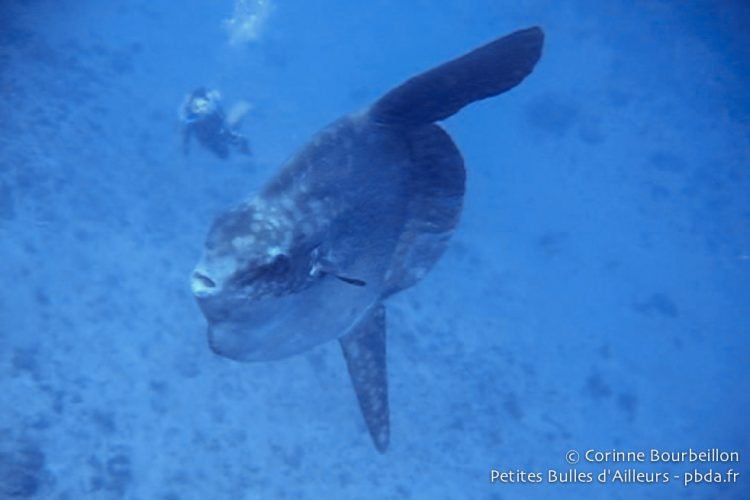 Except that, once again, I'm lagging behind. I accelerate my kicking pace, but the current is not in my favor. I palm, I palm, in vain, I do almost on the spot.

Wayan, who was gently mocking me on the boat at the briefing, because I'm the only one who missed the moonfish of the previous day, flips over and runs at me. He grabs my hand and flips like crazy to pull me to the beast. With him, it propels!!!!

Here I am on it, I'm going down 20 meters to get closer. I can hardly believe my eyes. It's big, it's huge!! We are dozens of divers surrounding the poor beast.

It is a huge, more oval-shaped, round, living disk with a rounded, somewhat astonished eye, two huge and powerful fins above and below, and two very small ones on the sides. 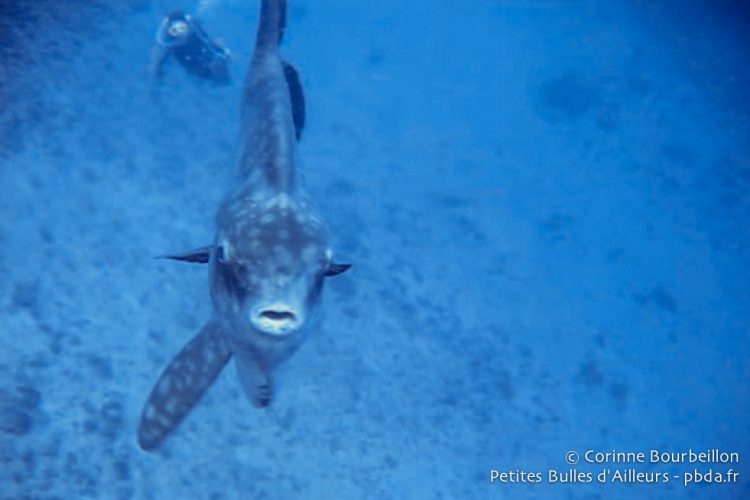 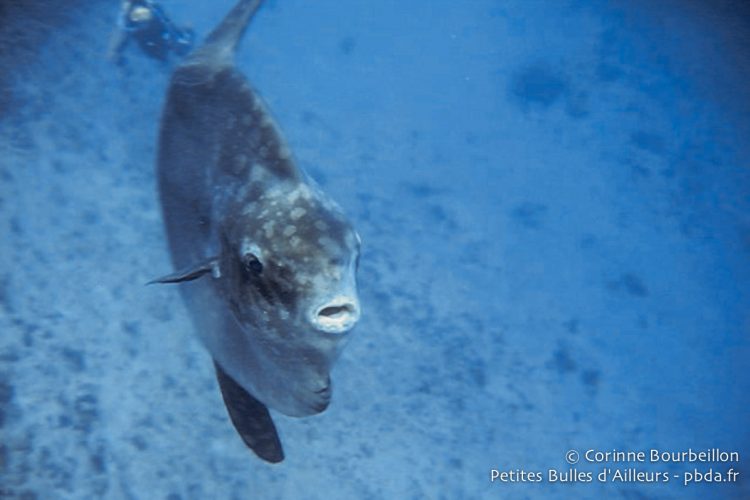 I switch on my camera, I shoot. No time for setting pictures. The pictures I put here are very blue, because they are taken from my videos. But no matter, it gives you an idea of the general look of the animal.

The mola-mola, who first presents me with his profile, accompanied by two little fish-drivers, suddenly turns towards me, looks me straight in the face, then continues his flight to go away in the blue, after me. have presented their other profile. I am in the front row. I scream for joy in my regulator. 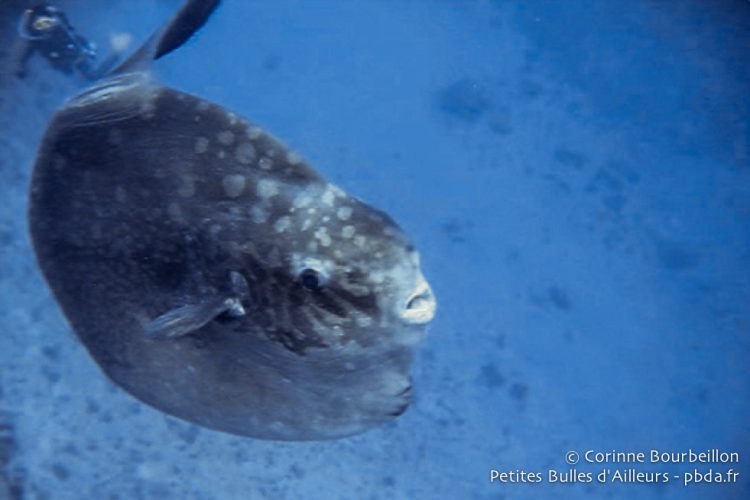 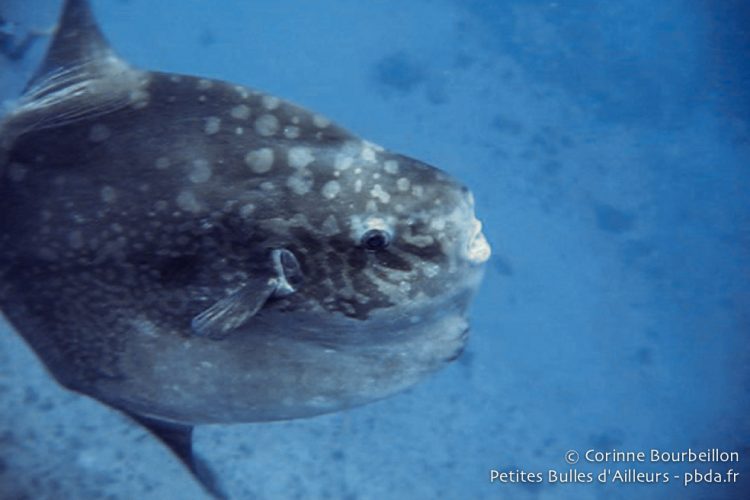 At the landing, I squirm cheerfully, one hand on the head, the other under the buttocks, imitating the swimming mola-mola. The others are getting married in their regulator.

I take the pose with Made, then Wayan and Kimberly, a Californian dive-master, and Peter immortalizes us with his camera... The video rendering of my little A95 is not fabulous, but it makes great memories anyway (thanks to Peter for the images where I can be seen "dancing"):

Cuttlefish in the current

What a beautiful day! During the first drift dive at Pura Mas Gading, we also had the chance to encounter a large placid cuttlefish. In spite of a furious current, I grabbed the reef and managed to draw its portrait as best I could. 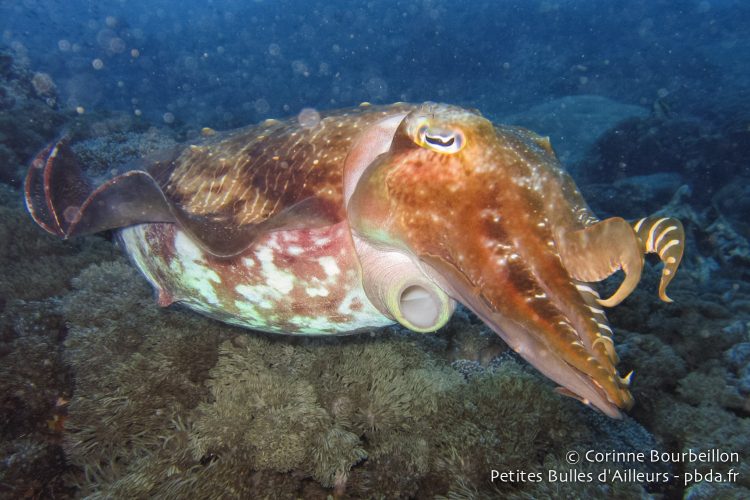