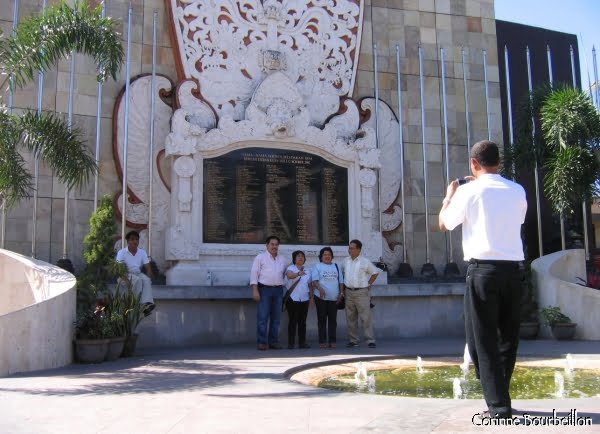 In Bali, just walk up Legian Street, Kuta, to find the monument to the dead of the attacks of October 12, 2002. The two bombs that exploded that night at the bar paddy's and at the disco Sari Club killed 202 people. Today, we see people being photographed in front of the list of victims. Funny idea ...

All those whom I saw thus taking the pose, at the foot of the monument, were Asians. Tourists, no doubt.

In Paris, we are familiar with groups of Japanese or Chinese tourists, with their cameras around their necks. It sounds cliché, but it's a bit true: Asian tourists love taking pictures.

Usually, this habit of always wanting to photograph everything amuses me a lot. As a Westerner, I am often even asked to take a souvenir photo in tourist places in Asia: I am asked to pose with someone or with a group, as I am so "exotic" in these regions. The funniest ones are the young people, boys and girls, who come to ask permission to take pictures of me with their mobile phone...

But there, in front of the war memorial, it made me a little hallucinated, the ritual of the photo-souvenir. How to say ... even six years later, it's a macabre limit.

The perpetrator of the 2002 attacks is a commando of the Jemaah Islamiyah, Asian Islamist group. Australia paid the highest price with 88 victims. Among the dead, whose names are engraved in gold letters on black marble, 38 Indonesians, 22 British, 7 Americans and 4 French. On 1 October 2005, new attacks hit Bali's tourist spots, killing 22 people in Kuta and Jimbaran.

Thirty-three people were tried and sentenced for the Bali bombings of 2002. Three Indonesian Islamists, sentenced to death in 2003, are due to be executed soon. Maybe before Ramadan, in September.

The association Together Against the Death Penalty (ECPM) reminds us, in a press release of 18 July 2008, of the appeal launched by the father of a young Australian killed in these attacks: he calls for the death sentences of the three men to be commuted to life imprisonment.