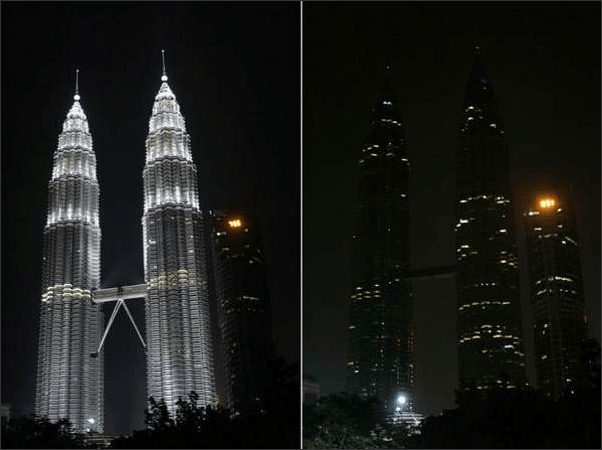 Earth Hour around the world

One hour in the dark to save the planet ... This is the operation Earth HourSaturday night, in several thousand cities and more than 60 countries, by the World Wildlife Fund (WWF). 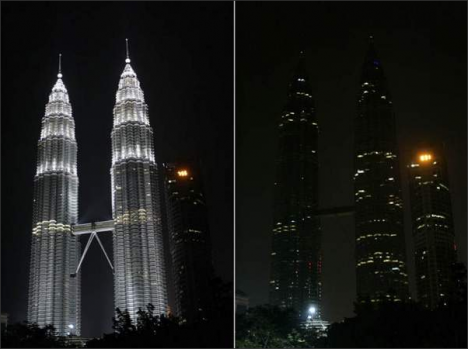 Other beautiful pictures of this Earth Hour all over the world, here:
" picture gallery on The Detroit Free Press (Freep.com)

Sydney kicked off with the opera house and the bridge over the bay suddenly plunged into darkness. All over the world, the lights on more than 370 monuments, including the Eiffel Tower, the Pyramids of Giza, the Acropolis and the Empire State Building, were turned off. For only a few minutes for some, instead of the promised 60 minutes.

The gesture was symbolic. The aim was to raise awareness worldwide about energy saving and global warming, nine months before the Copenhagen summit on this theme. The impact in France is estimated at a drop of just over 1% in electricity consumption.

I admit, I did not do anything special for the planet between 8:30 pm and 9:30 pm, Saturday night. I was sending an email to a colleague to complete an article, for the job ...

But this media and symbolic eclipse of electricity reminded me of night flights, during my travels to the East (not green at all, when one thinks of kerosene consumed by long haul). Seen from the sky, rich countries and poor countries are easily recognized. The first shine brightly, drawing sumptuous luminous mosaics on the ground. In comparison, the second ones seem to have only loupiottes ...