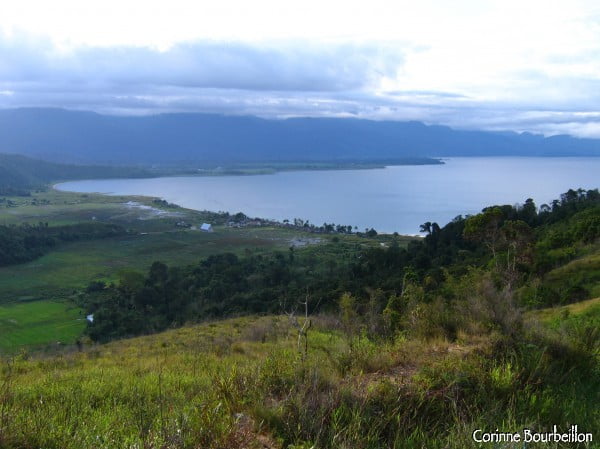 From Toraja country to Poso lake

The continuation of my journey to Sulawesi!!!! It is Saturday, July 14, 2007. Departure from Rantepaoin the heart of Toraja country at 7am under a bright sun. Arrived twelve hours later, at night, in a pouring rain, at Siuri Beach Cottages, on the west bank of the immense Poso lake.

We do not believe our eyes, when finally, after spending hours and hours rolling, the huge Lake Poso finally appears at the end of the road.

The Siuri Beach Cottages, where we spend the night, on the western shore of the lake, are about twenty kilometers from Tentena and 75 km from the city of Poso, further north.

The real reward will be for the next day, when, waking up, by opening the door of our respective bungalows, we discover a splendid beach of blond, deserted sand, and transparent water, tempting, irresistible ...

Quick, a quick splash before breakfast to check! A happiness, this bath at the jump of the bed. You can really swim, the water is delicious, not cold at all and the weather is nice.

But beware, it deserves a morning bath in Lake Poso. The least we can say is that it is not easy to reach ...

To get there, we endured hours and hours of road rotten, where we rarely exceed 50km / h, because of damaged pavement, potholes, ruts, rocks, trunks and branches. fallen on the road, stony passages, choppy sections ...

Not to mention all the living obstacles to be avoided: herds of indolent cows, intrepid dogs and children, families on motorcycles, women bending over under bundles, farmers' carts pulled by buffaloes, overloaded trucks or buses, spitting black smoke...

But I really don't regret cancelling my Makassar-Luwuk flight! This change of program allows me to discover Central Sulawesi, which I would not have seen otherwise.

By joining the small family of Dutch (met a few days earlier in the bus between Makassar and Rantepao), I have the advantage to enjoy the comfortable and robust car style 4 × 4, with air conditioning, that they rented to go up north. And frankly, it's not luxury, given the state of the road, in the corner.

Our driver, Ynus, besides being a charming guy, is a good driver. He knows the roads by heart, he rolls carefully (something rare enough in these countries to be noted), he stops as soon as he sees that the kids of my new Dutch friends are nauseated, in the pretty roads in lace of mountains.

And it gives us all the tourist and scenic breaks required along the way ... Including a sad crocodile farm, near Rantepao, halt accepted by Johan, the father, with my assent, during the haggling of the trip.

On the program: skinning of large snakes, brought by farmers, before our not very enthusiastic eyes. The guy from the farm keeps the skins for sale. Then, the snakes' flesh is chopped into pieces. And it's a kid as tall as three apples who wields the machete, proud to show us how he does it!

The sections are then thrown into pasture crocos that rust behind high walls in a gurgling pond.

The animals are impressive. Real lizards of prehistory. But we are happy to leave.

It's a scorching heat. After the first fascination, you feel a bit uncomfortable. The atmosphere is vaguely sinister, heavy.

The most pleasant "tourist" stop will be the famous butterfly waterfall, a little further north, a few hours drive from Rantepao. It is an amazing sight, which delight young and old alike.

At the foot of a waterfall, buried in vegetation, there is a bridge. And near the road around the bridge, where all the vehicles stop, the ground is littered with rubbish. But not only.

Above the colored plastic debris, dozens of wings fly, here and there. The little ones rave about, run after with the digital camera. The break a little further under the trees, near the water, in the middle of the butterflies, is refreshing and very pleasant to stretch your legs a little.

Everywhere, the blondness of these Nordic-type children fascinates people. The three kids are a little fed up, being fiddled, cuddling, pull the portrait every time we stop in a boui-boui to refuel in water or biscuits.

The only visible trace for us of the violence that had occurred a few years earlier between Muslims and Christians was the two or three military checkpoints.

The clashes in 2000 in the Poso Lake area killed nearly a thousand people. In May 2005, an attack in the market of Tentena, city majority Christian, killed about twenty people ... Ynus gladly answers our questions. The situation is in principle calmed, and the journey now presents little risk for the few passing travelers. The roads are controlled. But people like him, who work in tourism, have a hard time finding customers now.

When we present the passports, the officials obviously ask, each time, to see the three blondes. Ronja, Jelle and Silke (the Dutch first names are pronounced Y) then get off the car and lend themselves to the parade. Our driver loose on his side a few rupees to the guy on duty, just to speed up the formalities ... Common practice, and that suits everyone.

Arrival at Poso Lake at dusk

We arrive at Poso Lake at dusk. I open my eyes wide as we cross a village full of Balinese-style buildings. Each house has a small entrance that looks like a temple.

Ynus explains that the Indonesian government, for demographic and economic reasons, has "incited" the population to migrate from one island to another, with the promise of a piece of land and help to build the house . Here, people from Bali have been transplanted.

Night falls, a heavy downpour falls on the road. We do not know where we are going at all. We continue to walk along Poso Lake, to cross villages without light, to scan the narrow road behind the dripping windshield. Our relief is great when we come to Siuri Beach Cottages.

Obviously, difficult to haggle, since we do not have so much other solution for the night. But the bungalows are not bad and we have not yet seen the beautiful beach around us ... The family who keeps the place is busy in the kitchen, with the little they have, and short the beds. We are the only customers.