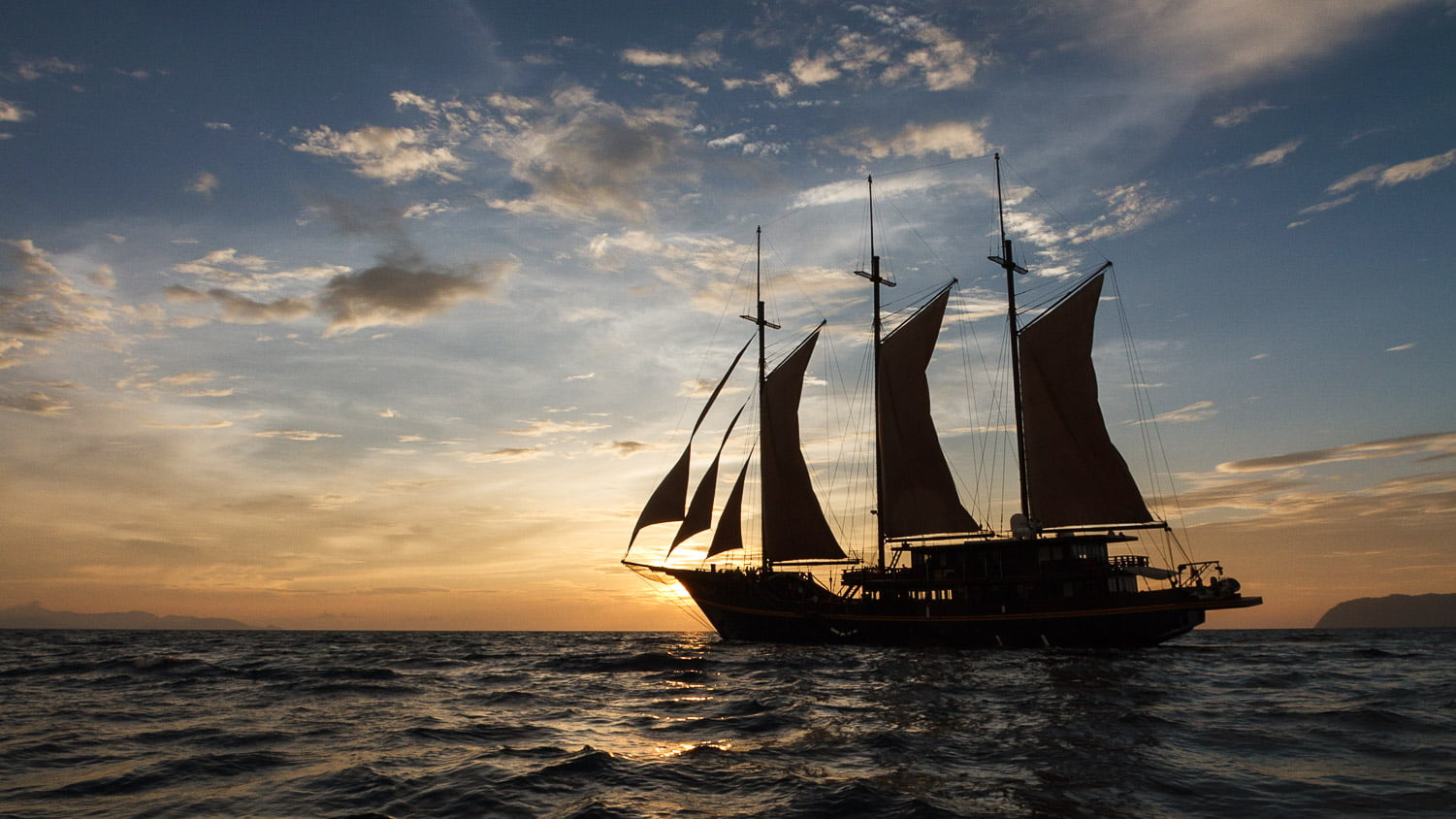 I came back from Indonesia three days before the terrorist carnage in Paris of the November 13, 2015. I had started to write this light, happy, carefree article on my dive cruise aboard the Waow...long before the horror of those attacks...

But how can we celebrate the beauty of the world after the horror of Bloody Friday? How can we talk about joie de vivre, travel and diving?

In the end, I decided to publish this article anyway. To be on the side of life. To put some blue in the dark. Because the motto of Paris, Fluctuat NEC mergitur, really makes sense in such a sad context...

So there you go. I had a fabulous adventure, on distant seas, aboard a ship as beautiful as a pirate princess ship: the Waow.

Wow? It is the acronym of World Adventure Ocean Wide. That's the exclamation you let slip when you discover this three-masted, bird-like thing. "Wow!"

60 meters long, 11 wide and 10 high, 800 tons. It was built between 2008 and 2012, while ironwoodThis rot-proof "steel wood", modelled on the traditional Indonesian transport ships called Pinisis.

I had already mentioned this boat in my "practice" article on Raja Ampat, more than two years ago (in the chapter on cruises and dives). I did not know then Waow that of reputation: a luxury vessel, specially fitted out for divers, sailing crazy routes in the Indonesian archipelago, in the heart of the "Coral Triangle.". What to dream ...

The dream has come true! I'm going home. of a twelve-day cruise to Indonesia on the Waow, in the seas of Banda and Seram. I put you below the map that summarizes the journey and the dives.

From Ambon to Sorong, from the Moluccas to Raja Ampat, far from the fury of the world, one can only marvel at the beauty of nature and the underwater world.

Of course, I gave myself a heart of joy...

On the road of spices

October 27, 2015. First night on board. In the darkness of my cabin, I watch for unfamiliar noises. The boat creaks and sighs as it splits the waves. There is the muffled hum of the engines in the distance and the quivering of the water nearby against the wood of the hull. I am taming the sounds around me.

But the sea is calm and the roll will remain moderate throughout the crossing. We make our way to the legendary Banda Islands, the spice islands (nutmeg, cinnamon, clove) that made the fortune of the VOC, the Dutch East India Company in the 17the and XVIIIe century. There's something exhilarating about following in the wake of the great navigators of yesteryear.

This first evening, as we have just left the port of Ambon, the gentle sway of Waow rocks me.

I have the impression that the boat is alive. I can almost hear him breathing with every wave he splits. A reassuring, soothing sensation that helps me slowly slip into sleep.

But I can't wait to get back below the surface. Diving gear's ready. And my camera already in its chamber, ready for the first immersion scheduled for early morning. I still don't know what I'm going to see underwater that first night...

There will be massive hammerhead sharks and the swirls of silver jacks. The swarms of blue triggerfish and yellow-backed fusiliers, the glittering waterfalls of glass fish, the multicoloured twirls of butterfly fish... And also the graceful green turtles, the enormous humpback parrot fish, the majestic napoleons. The bright yellow schools of snappers and the delicate interlacing of giant gorgonians...

I brought back tons of photos, which I finally find the time to sort through, now that I'm back under the grey Breton sky. I'll be back to show you all this very soon!