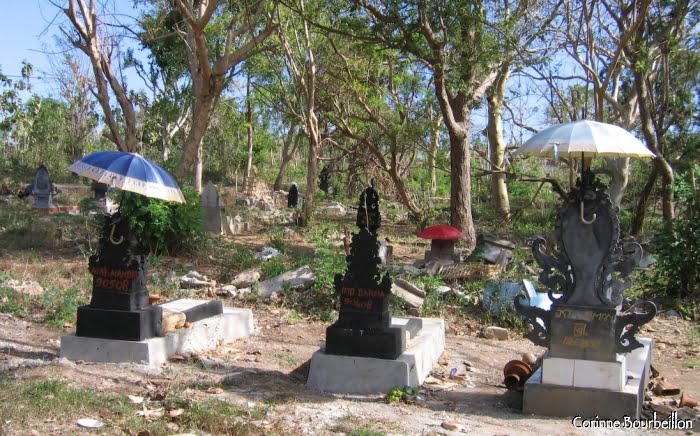 Still some pictures brought back from my last stay in Bali. Unusual images, this time, to attack the week with a smile.

The most surprising is surely the one of these tombs, topped with umbrella umbrellas... In this Nusa Lembongan cemetery, the dead are protected from the sun! 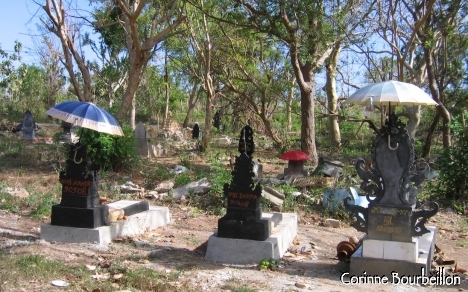 Religion is ubiquitous in Bali. Even during a short stay, it is not uncommon to attend a ceremony. They are numerous, throughout the year.

We come across quite often, when we move on the island. Which creates corks every time, the time to let the procession, as here, on the road between Amlapura and Sanur. 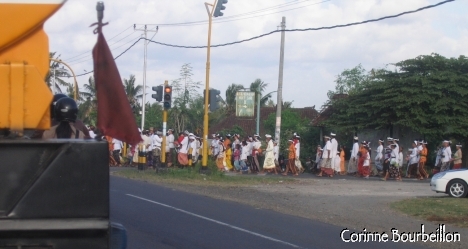 It must have been a particularly important ceremony. People continued to march past, dressed in traditional sarong and white turbans.

As for the road, by dint of traveling in Asia, I got used to the "exotic" aspects of the traffic. Whether it is driving with horns, or overloaded motorcycles, I do not pay much attention.

However, one opens wide eyes, the first time, when one sees a whole family crammed on the seat and or a motorbike almost disappearing under an imposing load: huge bales of straw, furniture, baskets, poultry and sometimes even live pigs... Below, a street vendor in Lovina, with his junk of plastic objects full of colors. 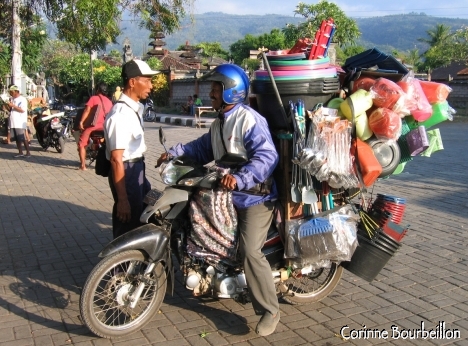 A closet on the beach? That's normal. We are in Sanur, just before the departure of the boat which makes the connection between Bali and the island of Nusa Lembongan. It's lugging everything that people need. Provisions and water, but also furniture and refrigerators, motorcycles, animals... 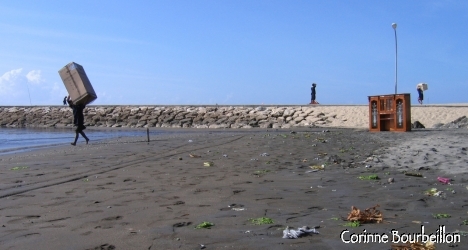 The cupboard is waiting on the sand for two guys to load it on their shoulders. They then hoist her to the roof of the boat, wading in the shallow water. I watch the operation, watching for the moment when it will slip and fall into the water. But they assure. The huge cabinet is finally stowed, without incident.

In the series "nos amies les bêtes" admire the audacity of this chick. On the beach of Pemuteran, the pigs of the village are snoozing in the sand and even let themselves be pecked by the snout! 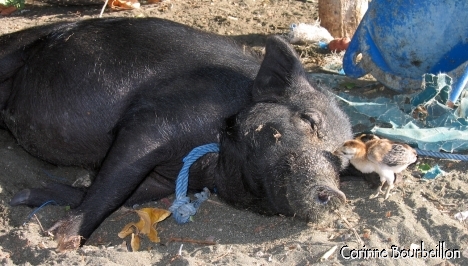 Finally, a small series "special divers". Observe this carrier which is cut out in Chinese shadow, on the pebble beach of Tulamben. 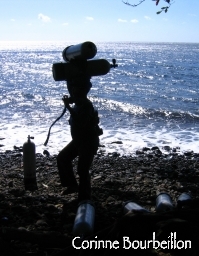 Two blocks balanced on the head and several belts with their weights around the waist and on the shoulders. Impressive, isn't it? The foreign divers who have just arrived in Asia, who have never seen anything like this, are surprised, sympathetic, a little embarrassed. Especially the gentlemen.

Some even want to wear in their place. What these women (because they are mostly women who wear) do not appreciate ... The job of carrier is painful, but it is their livelihood. On this ultra-tourist site, divers flock by the hundreds every day to discover the wreck of Liberty.

Finally, a sign displayed in the center Eco-DiveGentlemen, think twice before making eyes at a female diver! 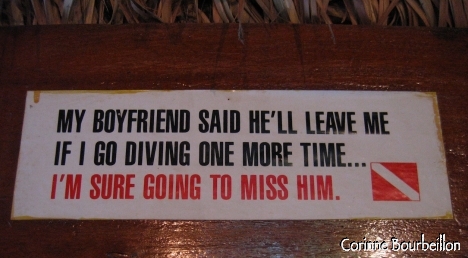 "My boyfriend says if I go diving again, I'm gonna miss him for sure. »