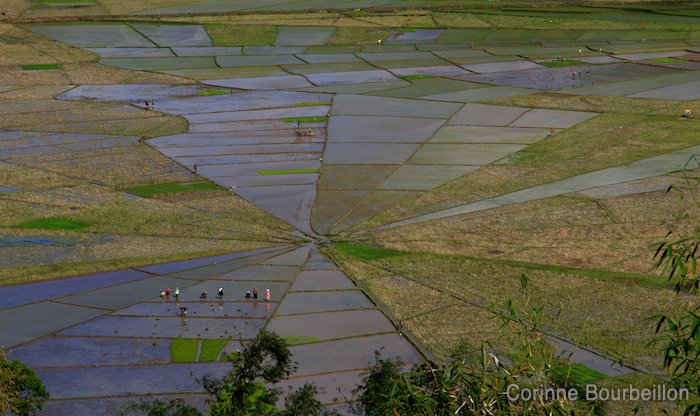 On the island of Flores, Indonesia, some rice fields take on unusual shapes. In the region of Ruteng, in the west of the island, rice is cultivated in a spider's web!

We are in the Manggarai Country, about twenty kilometers from the city of Ruteng. Here, tradition has it that the cultivable valleys are divided fairly equitably between the family clans, as compared to the irrigated land.

The soil is "cut" as one would cut a pie, starting from a center that corresponds roughly to the most irrigated point. Each slice is then divided into several plots.

The result is incredible landscapes, where the rice fields seem to weave cobwebs. We give them the name of lingko. 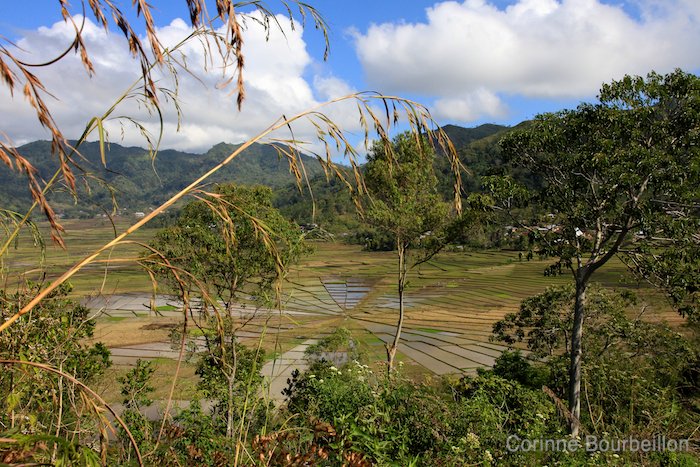 Panorama on the rice fields

I do not remember the name of the village where Missir, my driver, stopped. All visitors who cross Flores as I did stop here. The place offers a spectacular panorama on the cobweb paddy fields.

One is invited to sign a notebook that serves as a register and it is a good idea to make a small "donation", as is done in the traditional villages around Bajawa, which live mainly from tourism.

After, the kids of the village lead you to the best point of view, against another small reward. Counting 1,000 rupees (not even 10 cents) per head of pipe ... As I'm nice, I agreed to take five kids for me alone.

And you have to follow them, little guys! "Mister! Mister! » do they launch - whether you're a man or a woman - if you're lambing too much.

They climb at full speed in flip-flops on the small path surrounded by weeds, indifferent to the heat. I crawl behind slow, full dodger, dripping. Fortunately, the point of view is very close. 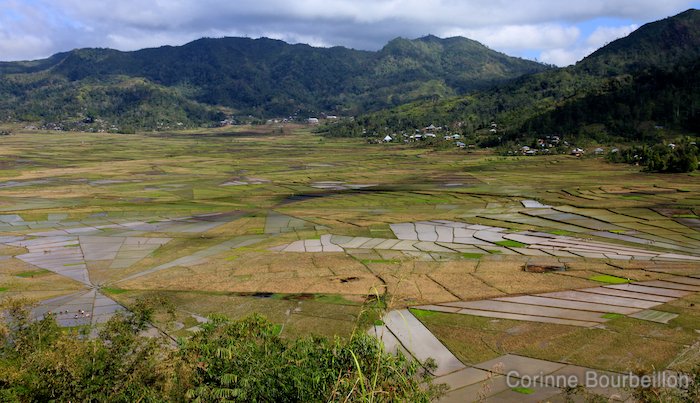 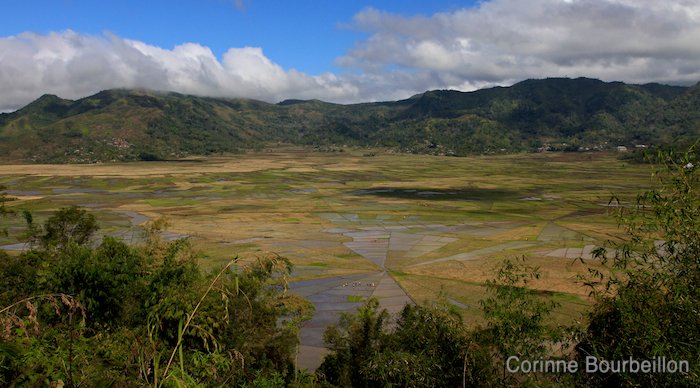 We see the small silhouettes of peasants bustling in the rice fields below. Hard job. 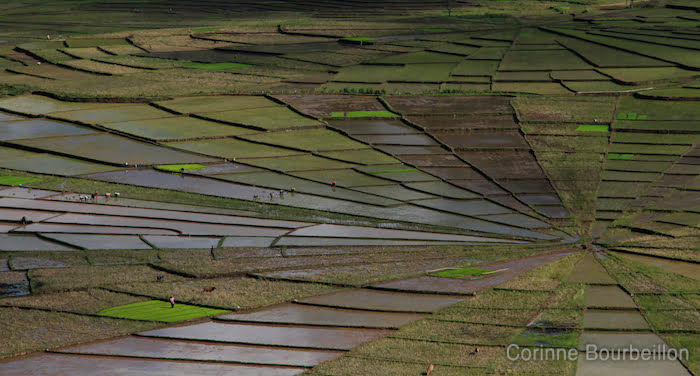 My little guides are impatient. They are waiting for their rupees. I take my time.

I admire the view endlessly, I take piles and lots of photos, watching the clouds that change the light and reflections on the water of the rice fields. 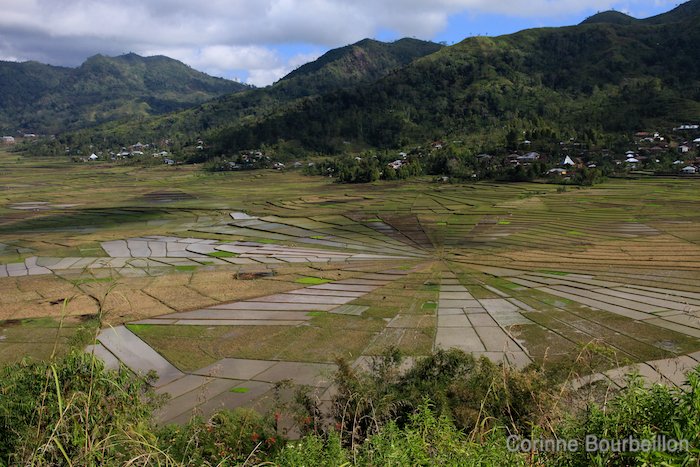 My driver stayed cool in the car. I go back inside, enthusiastic, after having ceremoniously deposited some crumpled notes in dirty handcuffs.

We leave by saying hello to children and continue our way among the rice fields, towards Labuan Bajo. We will stop often, for other panoramas, other photos.

In the fields, women often have their faces coated with a yellow or white powder, to protect themselves from the sun. The people who see me planted on the edge of the road, to photograph the rice fields, greet me with the hand and call me with the inevitable "Hello, Mister! ». Everywhere in Indonesia, it is customary to greet the exotic Westerners of both sexes by this formula, inherited from the Dutch colonization. 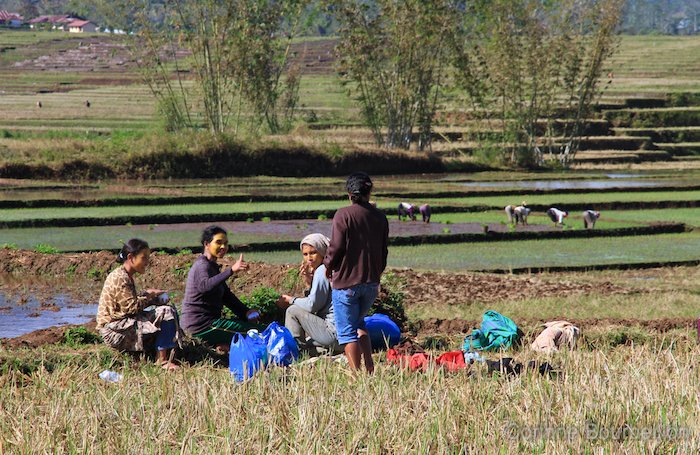 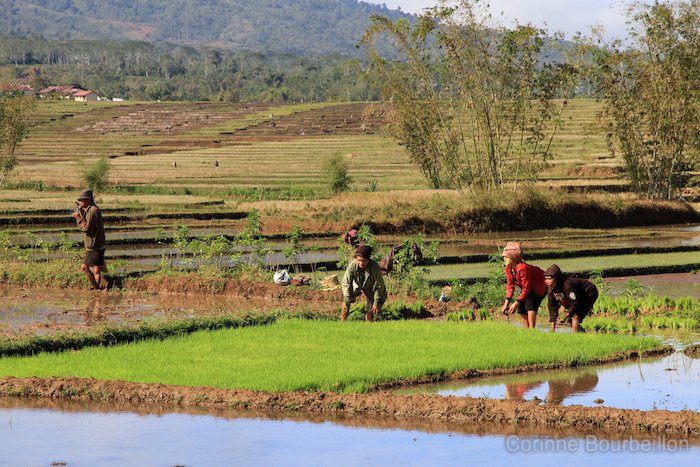 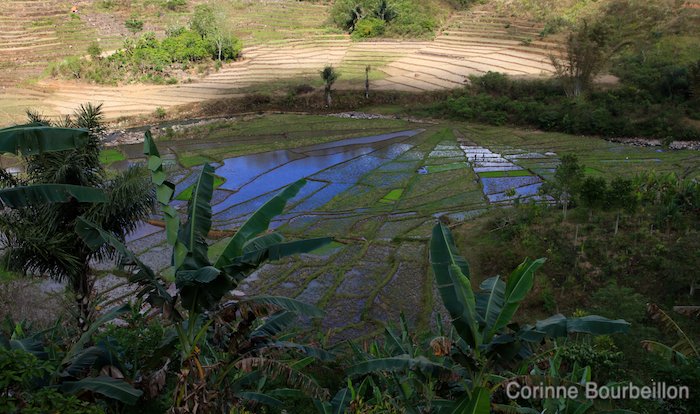 In villages that have not become tourist stops, the welcome remains simple, cheerful and spontaneous. We continue to swallow the slow-speed kilometers along this serpentine road that crosses the mountains and rice fields of Flores.

We are getting closer and closer to Labuan Bajo, to the west, and to Komodo Maritime Park. I can not wait to get back to the sea ...