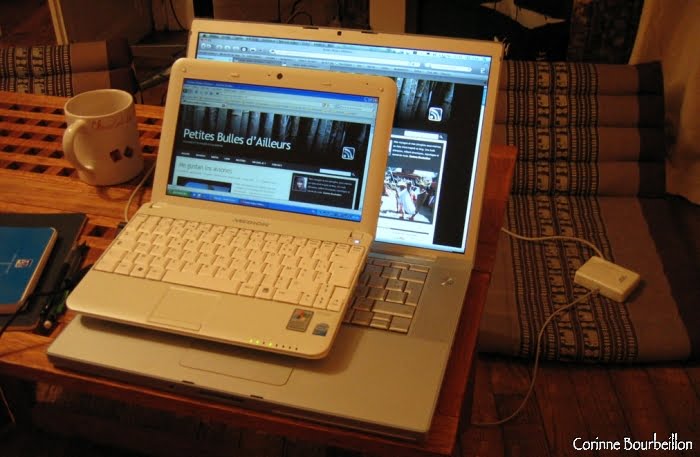 I fell in love with a netbook. Yeah, one of those cheap, lightweight mini laptops. When I travel to Asia in backpacking mode, I usually leave without my MacBook Pro.

I'm a little afraid of breakage, theft, weight, clutter (15 inches). And I manage on the spot with the bécanes of the centers internet ...

But here, my departure for Thailand is approaching and I do not want to spend hours in a web-center. I can see myself writing painstaking on the terrace of my bungalow, or sort my photos facing the beach. And then spend a few minutes at the internet center to transfer everything to Bubbles Underwater & Beyond!

Of course, during my previous "great luxury and comfort" stay in the Dominican Republic, I didn't hesitate to embark the Mac. But for this Thai trip which will be more "backpacker" I do not want to load myself or expose my precious computer to the vagaries of travel.

I will now be "technomade" with my new acquisition: the Medion Akoya Mini E1210 (it is also the one marketed by Orange). If I chose it, it's mainly for the comfort of the keyboard.

I tapped on all the machines found in stores, eeePC from Asus to the ECAF of Hercules, Aspire of Acer and their many little brothers. On the screens, I left explicit messages behind me: "This keyboard's too small, it's not easy to write stuff, but it's still important on a computer, isn't it?"

It made people smile as they went behind my back to look at the netbooks on the shelves. On an eeePC, there was even a guy who came to complete my text afterwards: "Yes, indeed, it's far too small..."

The Medion Akoya (clone of MSI Wind, better known) is one of the few netbooks on which I managed to grab a text quickly without looking at my fingers, as I usually do on a normal size keyboard. The trackpad is large enough, better than others (I do not like at all those who have the click buttons on the sides).

The screen (10 inches) offers reasonable comfort, too. There's enough storage space for 160GB and the performance seems correct for the use that will be mine. Finally, it weighs 1.25kg including battery (the "6-cell", the long-lasting one).

Its only flaw: for the moment it has Windaube on it (at least inside) as indicated on the label (which I'm going to remove). A horror.

I knew I was Macophile. And I'm sure to stay, despite this little knack technomade contract ...

UPDATE. After this experience with a mini-PC, which, in use, has proved to be really lacking power for the treatment of photography and video, I finally returned to my first love. After the Medion, I started traveling with a MacBook Air, very small all light, really top. Then again braked by the lack of power (computer and video files and photos more and more big), I acquired a new machine more powerful in 2016, a MacBook Pro 15-inch Retina screen ...

Because I almost got angry when, for the 15th time, Windows asked me to reboot after 50 million security updates. And even more so when I took three tries to find MY wifi network, a network that Macs find all by themselves (I had to activate the search by pressing the Fn key + the F11 key, I'm dreaming!!!!).

And then when the antivirus, for the 20th time, said to me: "Oh dear, careful, don't you want to buy Our-super-program-the-poloss (there's a big, scary red dog on it, not like the beta mutt in the help program) that will effectively protect your computer? »

Puréééééééeee.... Exactly like in the famous Apple ads "Mac vs PC".

I've uninstalled the hound, back in the doghouse! Then I quickly put Internet Explorer in the dungeon, and installed Firefox to navigate properly on the internet.

Then I removed all the preinstalled gadgets and other shortcuts that I do not need, and already the desktop is cleaner.

Anyway, the machine is cute, but it confirms all the evil I already thought of Windows. When I think of all the people who have PCs. But it must be a CAUCHEMAR to turn on your computer every day, not at all a pleasure!!!!

Well, for now I do not touch anything in the bowels of the system, I'm too scalded like that, I may do some nonsense. But I feel that I will get down to the joys of Linux someday. Even better ...

I would dream of getting the same result as in the picture below. But formatting a PC to turn it into a "Hackintosh" still seems a bit tricky to achieve. (And not at all to Apple's taste, of course).

In the meantime, I'm going to stick an apple-shaped sticker on my netbook. That, nothing forbids it.

Finally, I discovered that the new ultra-portable MSI (not yet released in France, presented at CES of Las Vegas) are strangely similar to MacBook Air ... it leaves you dreamy.