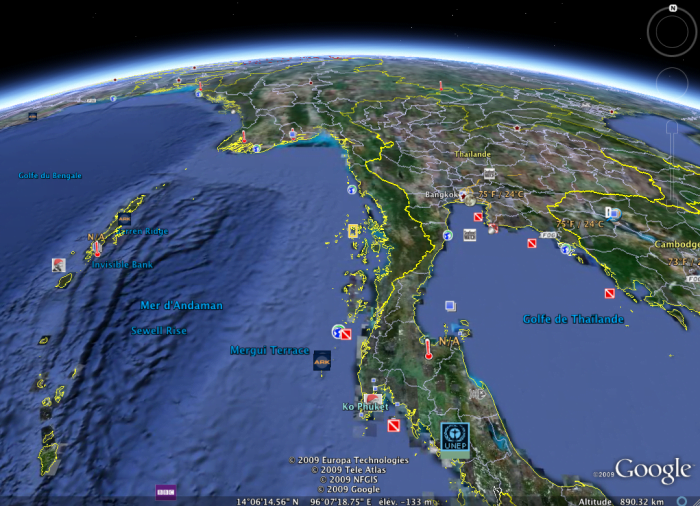 I want to dive in the Andaman Sea with Google Earth! But I can not...

How to dive with Google Earth?

I must be an idiot. I can't dive below the surface with Google Earth. The info is all over the web: you can now explore the ocean floor with the new "Oceans" feature of the software. Well, I can't do it. I can't go underwater.

Updated [September 26, 2012]
Three years after this article went online, Google Maps has launched the 360° exploration of several underwater sites, with the Street View option. I love it!
► See here : Explore the underwater world with Google Maps
The underwater walks are beautiful. Nothing to do with the disappointing experience I had in 2009 with Google Earth and that I mention below ...

I downloaded the new version, spotted the diving spots and Cousteau's red cap that gives access to videos. I followed the road of some whale sharks and found various environmental information around the sites of Sipadan and Similan. But no way to go underwater ...

It did look attractive ...

I wanted to do virtual dives before dipping my fins in the Andaman Sea in early March ... Apparently, for the areas that interest me (Thailand, Indonesia), the function should not be activated yet.

How's it going at home?