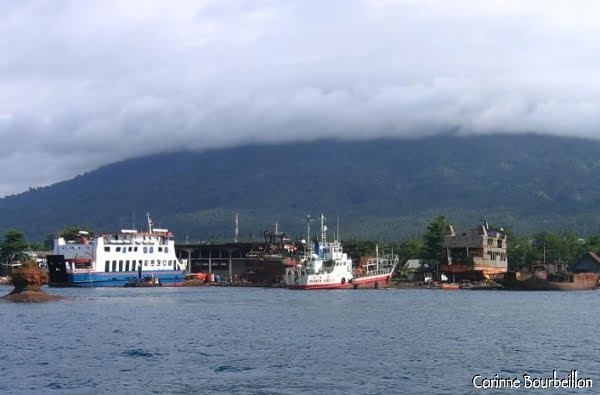 In the Lembeh Strait, huge cargo ships are languishing at anchor.

Last day in Lembeh, North Sulawesi. Time definitely goes too fast! With its rusty freighters and its black sand bottom littered with sediment and rubbish, this strait is really a singular dive spot, far from clichés.

Volcanoes, the harbor and the fish

Opposite the island of Lembeh, there is the huge port of Bitung. The two big local industries are coconut and peach.

There are ferries here, big freighters here, and there's a constant coming and going of boats of all sizes, supplying the different corners of Lembeh Island just in front of them or coming back from fishing. A few miles away from all this activity, one can see, here and there, old rusty hulls, abandoned, which quietly disintegrate in the waters of the strait.

But it only takes a few minutes of navigation to the north to fall on a completely different landscape!

We discover then limestone cliffs surmounted by jungle, interspersed with small black sand beaches, nestled in their belt of coconut palms. A few wooden huts, traditional boats with pendulum moored in front. On the horizon, always present, the shadow of volcanoes.

We usually stop for lunch near one of these beaches, for lunch, followed by a well deserved nap, before attacking the second or third dive of the day. The contrast between the port area and the string of beaches a little further surprises at first.

And it's still a strange feeling, when you're sailing in the waters of the strait, with the dive boat, to pass the gigantic ships moored at the Bitung wharves or wetting a little further offshore.

I always think about this when we come back: I am surprised that the underwater fauna is still so rich, here, with the pollution probably not negligible that must generate a port activity like this one ...

The dives are mainly of the "muck-dive", from the observation dive of the amazing creatures that populate this substrate of black sand not always ragoûtant, where many wastes mingle with the sediments.

For the moment, I'm savoring my last dive day, stoically ignoring the painful shooting in my right ear ... No, but!

Moreover, once under water, I completely forget this damn otitis, captivated that I am by the spectacular changes of color and texture of a well-named flaming cuttlefish.

Very shy, she lets herself be approached, however, without fleeing, by our objectives. Just gently shake your hand over the cuttlefish, to see waves of gray, yellow and red on his skin, which seems to waver at the slightest of our movements in the water.

The subject is, of course, very difficult to capture in pictures. The autofocus of my little compact camera is struggling to gauge the correct focus with all these variations of color, fast as lightning, sometimes fleeting sometimes durable, and suddenly replaced by a warty epidermal ...

Very very weird, as a beast. But so fascinating, that my partner Teresa and I finally stay longer under the water, for the ultimate photos, emptying our bottles and leaving our guide Atu, chilled, go back to warm up on the boat.

But of all the creatures I met in the Lembeh Strait, my favorite is the clown or painted frog-fish.

Of modest size, yellow with beautiful carmine-red spots, this little toad fish valiantly surveys the bottom of black sand on its small pectoral fins become paws. Totally indifferent to the excitement he provokes in us, superbly ignoring the passionate glances with which we cover him, he traces his path. Apparently no more bothered than that by our bubbles and our flashes. Unless his little hike is actually a distraught flight?

We take turns in front of the adorable little creature, who has the chance to be immortalized, for long minutes, from every angle.

See also → All my articles on Lembeh