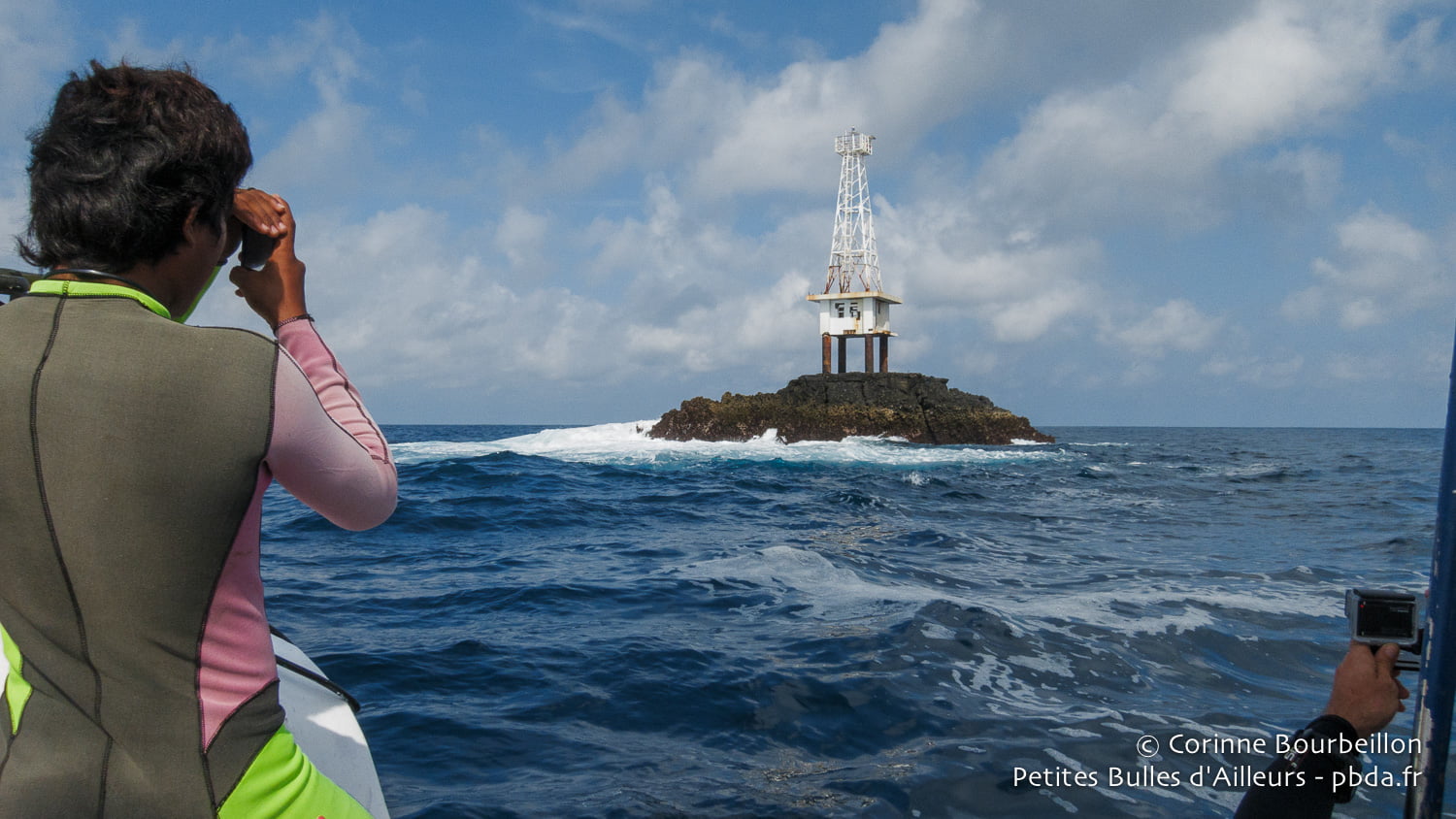 Everyone is leaving smartphone, GoPro and other cameras, near the famous site The Magnet ... (Belongas, Lombok, Indonesia, July 2015.)

There are dives that make the heart beat a little faster. I take you to the southwest of Lombok, in Indonesia, discover in video The Magnet and Gili Sarang, in Belongas Bay.

I admit. I was a little scared, before going there.

The Magnet is a pebble surmounted by a lighthouse on the open sea, off Belongas Bayin southwestern Lombok. A "pinnacle", as they say in English, beaten by the waves and whipped by powerful currents.

This is the kind of place where you dive only if the favorable conditions are met in terms of swell, weather, currents.

The base is 80 meters below the surface and the surf, very powerful, is felt up to thirty meters deep. Dive Zone, the only dive operator in the area, only takes in experienced divers, at least 100 dives.

For my Indonesian friends : you can't have access to Vimeo videos from Indonesia, because of censorship, so I uploaded my film for you on YouTube too. Please follow this link to watch my underwater video:
→ Dive Belongas - July 2015

The video above mixes images taken at sites The Magnet and Gili Sarang. The surf, the current and the rotten visibility did not help me much to make quality images.

But what beauty, what atmosphere, on these two sites! The kind of dives that speeds up the pulse and raises the direct adrenaline level!

The Magnet is so named because it has a reputation for attracting the "big one" like a magnet. I'll say it is. In addition to the "usual tropical fauna", we see schools of barracudas and jacks, large olive sea snakes, lots of sharks (many white tips, some grey).

There is also a good chance to cross schools of scallop hammerhead sharksfrom August to September-October. But you have to be aware that this "good" season for the hammers is also the "bad" season on the weather side: it is the time of year when the sailing (and diving) conditions are the most fearsome...

On a small, manoeuvrable boat with a powerful motor, you leave the peaceful, shallow waters of Belongas Bay and head out along impressive cliffs into the open sea. It's beautiful and foaming like in Brittany! 😲

Difficult to take pictures during the trip, it shakes too much. I advise against the crossing (20-30 minutes) to those who are prone to seasickness ... And yet, we were lucky enough to have a rather calm sea.

Me who was there in mid-July, period considered as the beginning of the season for the hammers, with conditions still not too difficult, I had the chance to see two cattle, during my first dive !!!

But it was very sneaky... they popped up in the blue, a little far away. It lasted only a few seconds, just long enough to see the distinctive shape of their mouths. There was no way to make an image, they disappeared at once!

Dive Zone guides certify that hammerheads are much more numerous at the best of the season, in August and September. It is surely true, I read on the internet of the accounts of travelers-divers going in the same direction.

But it seems that the famous scalloped hammerhead sharks are a very shy species. They keep their distance and are quite difficult to approach. To this, are added the difficult conditions of the site. In short, in my humble opinion, The Magnet is clearly not the place to photograph or shoot hammers. There are better sites for this kind of challenge around the world ...

On the other hand, Gili Sarang, another big pebble at the exit of the Bay of Belongas, is in this season THE site for the mobulas raysalso known as "sea devils". The place is less difficult to dive than The Magnet and is formed by an aggregate of imposing rocks descending to a sandy bottom in the 25-30 meters.

Rays can be very numerous, evolving by dozens in graceful formations. The current is sometimes strong, but it is perfectly manageable, given the topography of the bottom. And the spectacle is grandiose!

The big rocks form in places small caves where one can sneak. There are also beautiful soft corals, east side. The place, less exposed, lends itself much more to photography ... So I let myself go a little.