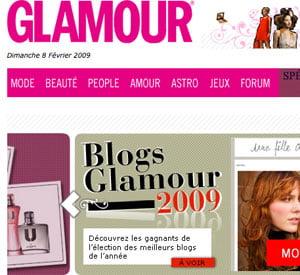 I can not believe it. Bubbles Underwater & Beyond is No. 2 in the ranking of 2009 blogs from the magazine Glamourin the "travel" category. What is pleasing is that it is the Internet users who voted. This allowed me to discover four other very nice blogs by globetrotters, which I invite you to browse. 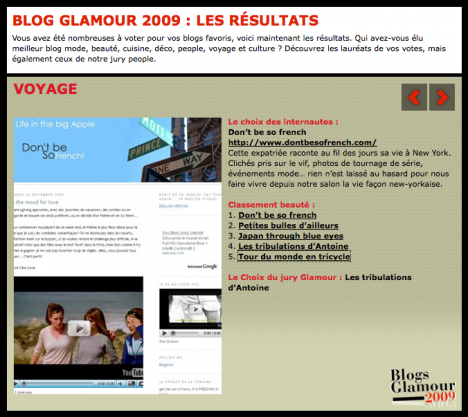 Starting with Don't be so French, No. 1 in the ranking, and much more "glamorous" than mine, I must admit, since it is mostly about fashion in New York.

My personal favourite is Japan through blue eyes: offbeat, often accurate and quite funny chronicles of daily life in Japan by a young man from Lille who is an expatriate in Tokyo. I'll take the time to go through his interesting and tasty posts at greater length.

Lovers of India will feast with these 2006-2008 travel diaries baptized The tribulations of Antoine. Exotic at will, since it also takes us to Syria, Ethiopia, Kenya or Dubai ...

Finally, really apart, Michel's tricyle round-the-world tour: at 61 years old, he has already covered tens of thousands of kilometers by pedaling... A blog as surprising as it is endearing. At the moment, he is in Burma (Myanmar) and heading to Thailand.

Well, on the web page of Glamourthey made a mistake in their little red tittle, and marked "beauty rating" instead of "travel rating". (EDIT--new visit made since: it's rectified!). Don't worry: I'm not going to start writing advertorials about trendy lipsticks or waterproof mascaras...