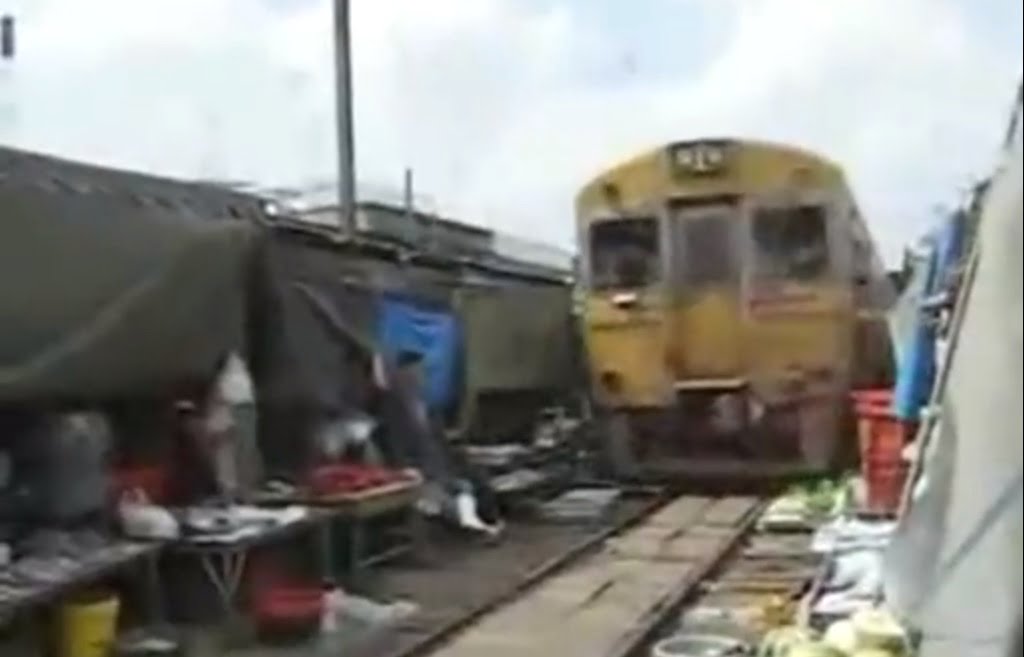 A train at the market

This train, which runs through the Maeklong market, near Bangkok, is Thailand's most famous. We fold the stalls, flush with the rails, to let it pass!

Sunday relaxation, with this video shot in Thailand, unearthed on Youtube and DailyMotion. It's happening near Bangkok, on the SRT Maeklong-Ban Laem line.

The sellers folded their stalls to let the train pass, in the middle of the market, and replace them directly behind, as if nothing had happened ...

Below, a longer video (8:42), with commentary in Thai subtitled in English, to relive the live-live scene from inside the locomotive, but this time from Maekong Market.

The author filmed the journey to Ban Laem station (Mahachai West) at the end of the line. In the kind of unusual stages, it's not just crossing the market: wait to see the monkeys watching for the train and the rails barely emerging from the water in the middle of a marsh ...

For more information on this particular Thai suburban train, visit this blog post Thai Transit or this site page Rail Page where it is repeated identically (in English).

This dilapidated line is the slowest in Thailand. The train passes 4 times in one direction and 4 times in the other direction, every day of the week. His arrival at Maeklong Market has become a tourist attraction.

For buffs: type the words train + bangkok + market in the search engines of Youtube or Daily Motion... There is a package of videos on this train. There is even a group, The Train Market, which was created on Facebook. Probably the most famous train of Thailand!