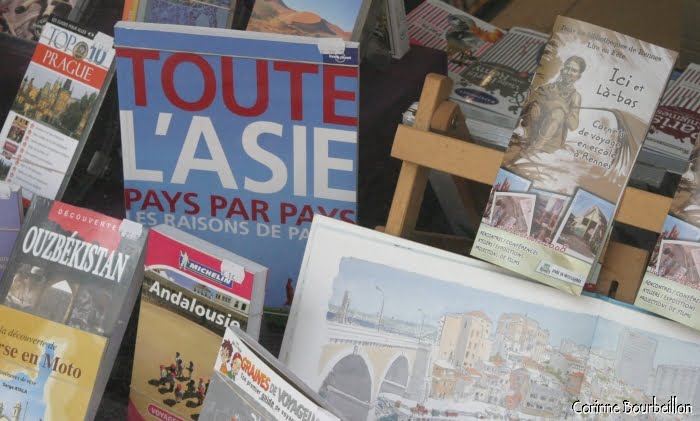 That's it, I fell for this book, spotted without the showcase of the Travel Bookstore, Rennes: "All Asia, country by country" Lonely Planet editions.

All Asia, country by country

I've been coveting this book for days. Its title, in big letters on a blue background, caught my eye: All Asia, country by country. Yesterday, on the return of a report, while I went back to the Travel Bookstorein Rennes, I cracked. And I did well.

I plunged in with delight. It is a large format book, but Lonely Planet had the good idea to do it in soft cover, for the French edition, which makes it easy to handle, leaf through.

The photos are so beautiful, that you start turning the pages at length, as soon as you have it in your hands. A superb invitation to travel through images! From Bhutan to South Korea, from India to Thailand, from Iran to Papua, from Nepal to Japan, it is Asia in the broadest sense that we explore.

Judicious choice was made to put men at the heart of the illustrations. There is often a look to hang yours, which makes the pages very lively. A kid suspended between blue sky and white sand on a rudimentary swing in the Philippines, saleswomen in front of their garlands of yellow flowers in Kathmandu, Chinese monks in scarlet dress frozen in full swing in front of a basketball hoop, peasant farmers transplanting rice in Laos , face ravished by the life of an old man in East Timor ...

The layout is sober, clear and neat. About thirty authors collaborated on the book. The texts go straight to the point, give historical and social landmarks, teach you a lot of tricks or refresh your memory, depending on your knowledge of this or that country. The book is subtitled "Reasons to leave"... As if I needed it!

And then, there are maps (I love geography) and mythical roads (like in my article on the day before yesterday on the interactive world map WanderLust). As well as a series of fascinating thematic articles at the end of the book. Small excerpt:

The word Asia has different meanings for everyone. ...] There are, however, certain themes that conceptually unify Asia. We have highlighted several of them in the essays at the end of this book: the profound spirituality of a region, the cradle of all the world's major religions; the importance of environments and their influence on lifestyles and traditions; the endless creativity of a pop culture that delights the world on screens, on the airwaves and in the streets; and the tradition of adventurous travel that inspired this continent long before Marco Polo, which was revived by hippies and their backpacks, and is still very much in vogue.

In short, there is something to read and travel and dream. The book, which has just been released, costs less than 30 €. I think you get what you pay for, as the other person would say. What to occupy nicely the long winter evenings, waiting for the next departure.