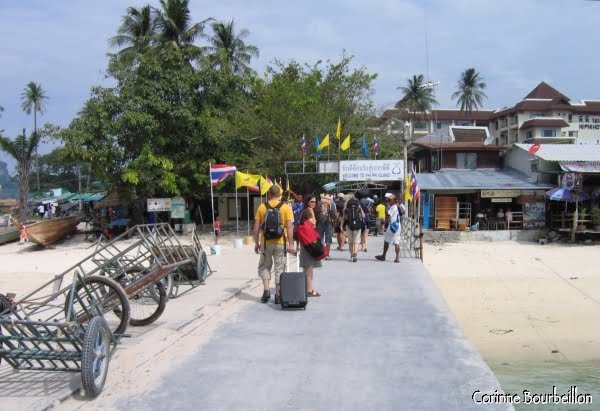 The pontoon of Koh Phi Phi, where all travelers arrive. At the end, under the welcome sign, touts for hotels and guesthouses are waiting ...

Koh Phi Phi is metamorphosed since my last visit in July 2005 (almost six months after the tsunami). The transformation is incredible.

Two years after the tsunami

After a first night Bangkok, a plane shot with Air Asia to join Ao Nang (Krabi) in the South, then an hour and a half crossing by boat: here I am in Koh Phi Phi.

The island has changed, since my last visit, a year and a half ago, in July 2005, about six months after the tsunami of December 26, 2004. I suspected it a bit, but the transformation is really incredible. .

The reconstruction continued at full speed, a little anarchic and it still tinkers in every corner. Heaps of hotels and businesses are coming out of the ground, there is work everywhere.

I have a hard time finding the lonely big banyan on the back beach, the only one left standing after the wave. Today, it overshadows the chairs and tables of a restaurant, set in front of rows of umbrellas and skewers of tourists who cook in the sun, next to a large resort with infinity pool ...

The tourists are back, in great numbers. The first difficulty, and not the least, when you arrive and you have not booked anything in advance: finding accommodation. Prices have skyrocketed and the simplest room is already looking in the 1000 baths or about twenty euros, which is staggering for Thailand ... But hey, Koh Phi Phi is an ultra-tourist enclave that differs from the rest of the country.

After the arrival of the boat, I hurry to leave my cumbersome bags at the dive-shop with which I will dive the next day, to go around the guesthouses, almost running on the way, behind other travelers weighted with backpacks to pass them, just to arrive first !!! Everywhere "Full" signs, but I end up finding a roof anyway.

The island remains beautiful despite everything

For this first day, lazing on the beach amid the spectacular scenery of Phi Phi, with its large cliffs in the sea, and registration at the diving center ... I will be able to release my new equipment tomorrow, finally!

You can find other photos of Koh Phi Phi, which I posted on my very first site Carnets d'Asie du Sud-Est (South-East Asian Diaries) into July 2005 and January 2007.