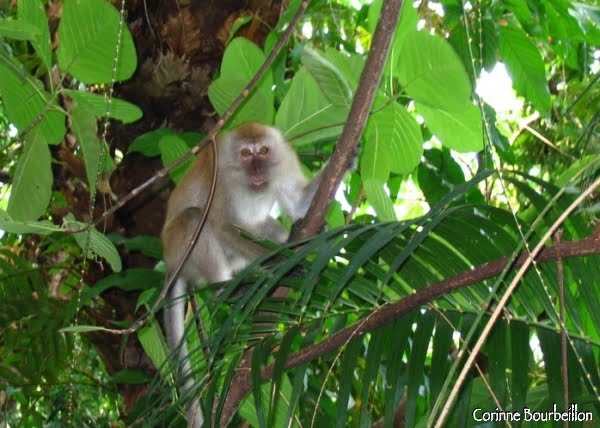 A monkey seen on the way ... (Tioman, Malaysia)

Friday in Tioman, day of rest and ride

The Tioman jungle in southeastern Peninsular Malaysia is a protected nature park. Dense, almost impenetrable, it covers most of the island.

Let's hope that the airport opened by the hotel company Berjaya and the "duty free" status recently granted to Tioman will not upset the situation too much... But I'm not optimistic about that.

This Friday, I decide to do as Muslims do and rest. After three days of non-stop diving, I feel like drying off a bit!

So I rent a bike to go to the village of Tekek, where live most of the real islanders, the families of fishermen and small merchants in majority.

To leave "my" beach, you have to cross a mini-hill via a small staircase. Carrying the bike to cross these few steps is not a big effort, but it is enough to put me in swimming. Malaysia, the country where you never dry ...

Under the guise of trees shading the path here, marauding monkeys are watching me approach. Gently I put the bike to take the camera out.

But they are wary and return illico to hide in the branches.

The day of my arrival in Tioman, I had been amazed by my meeting, on the way to the beach, with two enormous monitors. When I say enormous, I am not exaggerating: those of Perhentian Kecil are small lizards of nothing at all, compared to these mastodons with crocodile-like allures who fled in front of me with a surprising agility for their wandering gait of antediluvian batrachians.

They did not have time to take a picture of them. But the monkeys, once perched on their branches, are less shy, and I manage to take some shots.