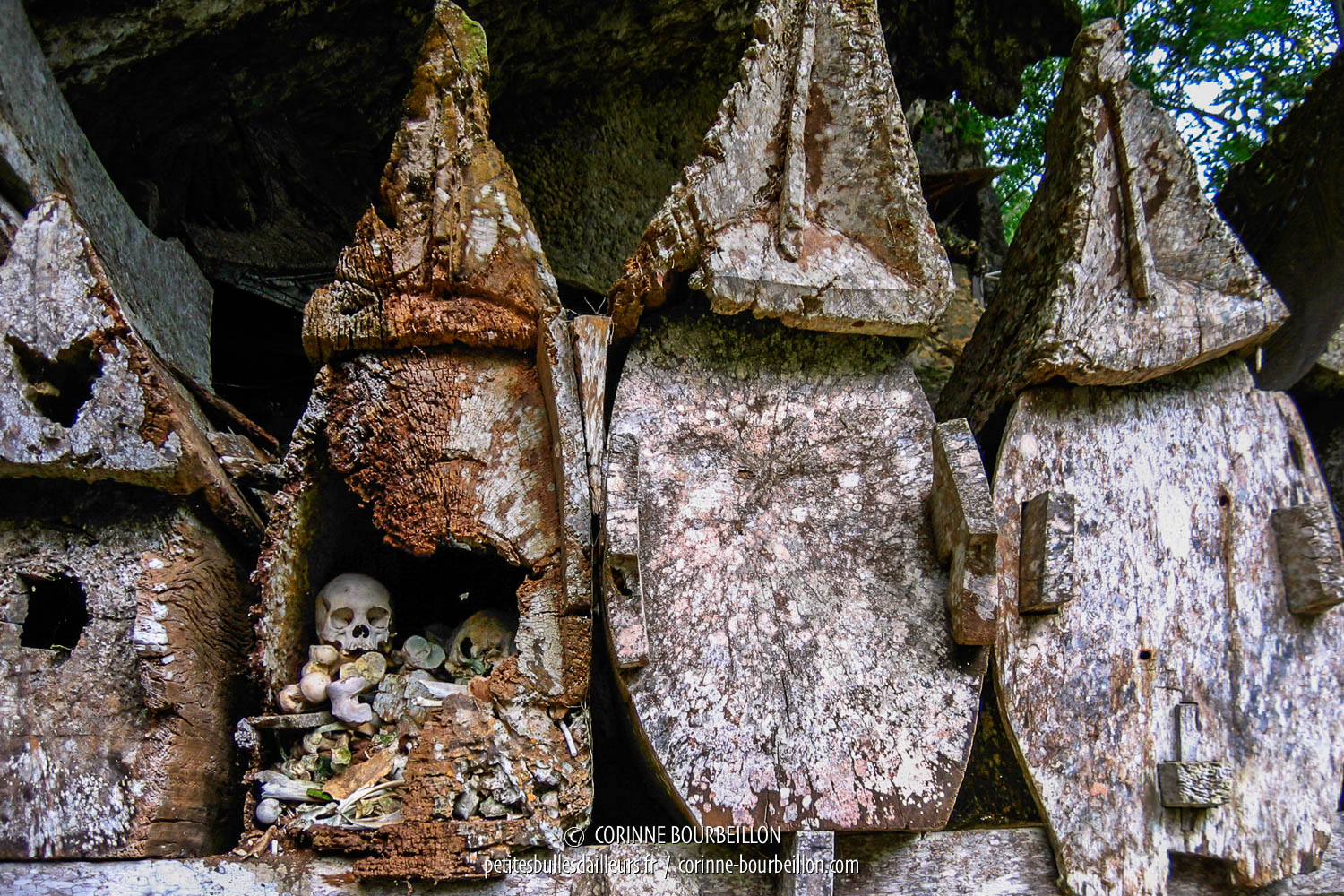 Skulls, caves and a swimming pool

I take you back to Sulawesi, in the Toraja country, where I spent a few days in the summer of 2007. On the program: scooter ride from Rantepao, to discover the sites of Ket'e Kesu, Londa and Tilanga.

The hotel in question, I landed there on the advice of other travellers I came across en route: it is the Wisma Monton. I recommend the place, it's central and quiet, clean and cheap, the rooms are spacious, spread over balconies around a garden.

Night negotiated 90 000 Rp (about 6-7 €), with hot water and breakfast included, no surprise supplement, and charming welcome. Below, the interior of Wisma Monton and the view from the balconies of the hotel.

I leave on my motorcycle with a light heart, my nose to the wind, without fear. Motorbikes", as everywhere in Southeast Asia, are in fact scooter mopeds with a left-foot gear change. No need to be a motorcyclist to ride these machines.

Once crossed the limits of Rantepao, the roads and paths are very quiet. Just roll at a low speed, keeping your thumb on the horn and an eye on dogs, chickens, children crossing ...

First stage, well known from the local tourist circuits: Ket'e Kesu. I'm there early in the morning, there is not a cat. And the light is beautiful.

There are pretty traditional houses and rice granaries tongkonan, tau-tau (the statues of the deceased) locked behind a gate, recent graves and ancient tombs suspended, with gnawed wood and bones scattered at the foot of the cliff behind the village.

Peaceful atmosphere, again, as in Lemo. Curiously, the neighborhood of death does not frighten, in these countries, but rather inspires serenity.

Then head for Londa, another famous burial site. Here too, tau-tau watch visitors from the top of a balcony. But we come mostly to Londa for the "Caves"caves full of skulls. Not very stewy. Cigarette "offerings", money, candy are left loose near the bones.

I also risked myself in the tiny wet casing linking the two main caves, led by a guide who praises his services at the entrance with a powerful lamp. The lamp is indispensable, but the casing without interest. It just allowed me to check that I have good resistance to claustrophobia ... Both caves are actually accessible from the outside.

The site, outside, is beautiful. Abrupt setting of cliffs surrounding a rice field. I give the promised rupees to the guy with his lamp, then go back to my bike.

Swimming at the natural swimming pool of Tilanga

Direction the natural pool of Tilanga. The walk from one site to another is very pleasant. We pass by country roads little frequented, where people greet you cheerfully, along rice fields, fields, bits of forest.

Tilanga is a kind of bowl in the rock. The water is very cold, very clear. We are under the trees, it's good. It's a place where young people, local families, holidays or weekends meet.

I hardly arrived when a group of young girls spotted me and waved at me. I join them trying not to break my face on the irregular rocks that line the body of water. Boys of the same age, a little further, watch me approach.

I make friends at the pool. Uny, 21, who is studying English to become a teacher, is happy to make the conversation. She is there with Veronika and Lina, I do not know which of them is his cousin, and a whole flop of kids and teens of different ages, brothers and sisters of each other ... We chat, we sympathize, obligatory photos and exchange of email addresses.

The group of boys passes us, calls the girls in a slightly mocking tone, and walks away by the way. Some dare to wave a little goodbye to me, others shyly turn their heads when I meet their eyes.

I'll catch them a little further on the road, with my bike. They beat each other on the way back to the first stop bemos (local minibuses). I stop at their height and do a little chat.

I begin by responding to their "Dari mana?" (where are you from?) and the usual questions with the little bit of Bahasa Indonesia I know, but the rest is in English. They are doing well. They are hallucinating to see a tourist, a girl moreover, to walk like that, without guide or chaperone, and motorcycle. But they think I'm right.

We leave with great joyful greetings and I take the path of Rantepao.

Before returning, I push myself by curiosity to the market of Bolu, near Rantepao, where I offer myself a mie goreng (sauteed noodles) quite average, too fat, in a boui-boui. Another market where we sell everything and lots of odorous foods more or less identifiable.

AT Rantepao, I find my Dutch friends, Suzanna and Johan, who want to rent a car with driver two days later, to go up to Poso lake. They're offering to share the car with them. They are looking for a comfortable, air-conditioned family car for their three children: two girls, Ronja and Silke, and one boy, Jelle (the J in Dutch names is pronounced Y). There will be space. I'm tempted by the walk and I accept it with pleasure.

So I decide to change my plans. Initially, I thought to save myself fatigue and hassle down in the South to Makassar, to take a flight to Luwuk. And Luwuk, win Ampana by road, from where we embark for the Togian Islands. Instead, I will travel by the inner road.

"View map of the route

I'm really pleased with the offer of Suzanna and Johan, because I wanted to make this trip, but I hesitated to do it alone. The region of Poso lake Was considered unsafe for solo travelers according to the travel guides I consulted (it is apparently very exaggerated, the situation has calmed down since). Renting a car with driver for me alone was not within my means. And I did not feel the bravery of an endless and uncomfortable local bus ride without air conditioning on broken roads.

I manage somehow to cancel my Makassar-Luwuk flight on the Merpati, booked a few days earlier to Manado. The people of the travel agency Toraja Permai, at RantepaoIn the main street (Jalan Mapanyukki), are very friendly, very helpful. They make all the calls for me, set my story. The refund of the ticket will be recovered, minus some expenses, to the agency where I bought it in Manado.

The Mambo, haunt of local guides

I'm going to dinner at the restaurant Mambo, along with my other roommate neighbors at Wisma Monton, a couple of Spaniards, Joseba and Anna, with whom I sympathized. The Mambo is the haunt of local guides and we're having a good time listening to them singing, in all languages, to distract the handful of tourists seated there.

They are very nice, all these guys, incredibly multilingual. The Guide to the Routard criticizes their aggressive behavior, but I did not observe anything like it.

On the contrary. They tell us lots of interesting things, they are funny, open. And dismayed to learn that we prefer to go without them to visit the country. But as they are paid a few beers to comfort them, they do not hold us to them. We drink, we laugh.

Anyway, they already have customers this week. Groups on tour are in Rantepao for a few days. Among them, many French.

The next day we are planning, Joseba, Ana and I, to go on a motorcycle ride together in the North, around Batutumonga.