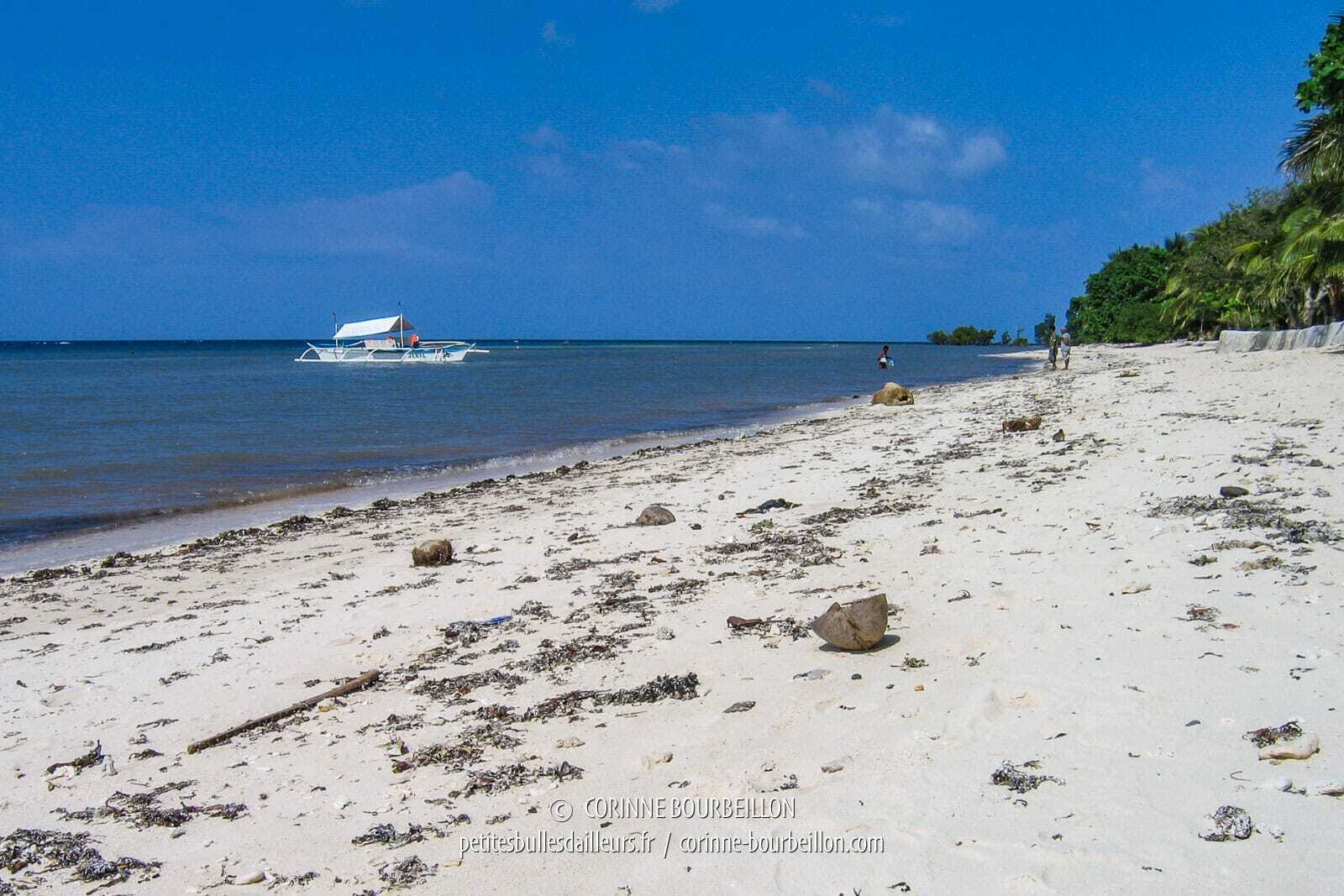 I did a good job of leaving for Siquijor without waiting. On arrival, I find a beach almost deserted, the beautiful Sandugan Beach.

From Alona to Siquijor in banca

Jeril embarks me so the morning since Alona, as agreed, on his banca. (Read the previous post → Why am I going to flee Alona Beach).

Rate for this crossing the peninsula of Panglao to the island of Siquijor : 1 200 pesos (18 €). Besides my little person, there is Sarah, a young German girl, and Sunny, her Filipino boyfriend, as well as the captain of the boat and another guy who is there to help with the manoeuvres.

The weather is nice. Blue sky and calm sea, the crossing presents itself well. I think I would have hesitated to do it if there had been waves.

Because a ride in bancaIt's very nice, but especially if the sea is flat. Once, at Sogod Bay (Leyte)During a dive, the weather turned and we were shaken a lot. The banca was fortunately quite comfortable, big and well equipped for divers, but this kind of boat is still limited as soon as there is swell.

On our way to Siquijor (pronounced "Siki-hor") a stopover snorkeling (or PMT in good French, that is to say palm-mask-snorkel) is planned on the island of Balicasag, in front of Panglao. An island rather, with a cute white sand beach, located about three-quarters of an hour / an hour from Alona.

At the edge of the coral reef, there is an impressive concentration of bancas: diving boats, boats transporting tourists snorkelers (swimmers with palms-mask-snorkel) like us, small boats of fishermen reconverted in floating shops of rent of fins, masks and snorkels ...

I am amused by the guys who row frantically towards a big boat that has just arrived, loaded with Koreans (presumably), recognizable by the fact that they all wear a bright orange lifejacket. In Thailand, those tourists who can not swim are similarly identifiable ...

I am the first to get into the water with fins, mask and snorkel (which takes the water), lent by Jeril, which prevents me from having to undo my diving package. Between the beach and the limit of the drop, the corals are pretty badly damaged. Underwater life is concentrated below our bancawhere the superb wall of coral descends to the blue depths.

We stay a few moments to dabble, then we head for good on Siquijor.

Offshore, we have the chance to see, far too far, alas, a dark mass that disappears quickly between two waves. "A whale! », says Jeril. A whale? Or a whale shark? We scan the waves where the shadows have disappeared, to no avail.

A little later, twice, we also spot dolphins, which leap gaily over the surface. Again, the show is too far away and too short for our cameras.

An hour and a half later, our banca arrives at Siquijor, on the beach Sandugan.

There, a simple bungalow, but cute, lying on the beach, next to a few other bamboo bungalows, waiting for me ... Two ladies of a certain age on the terrace. They seem delighted to see me.

Yes, the bungalow is free, they tell me. For 600 unfortunate pesos at night (about 10 €). In Panglao, depending on the category of accommodation, prices ranged from 800 to 1,500 pesos on Alona Beach, or 3,000 pesos for a room in a resort with European standards with swimming pool ... ????

This bungalow found in Siquijor fills me. The place is called Islanders Paradise and is aptly named. Plus, there's a little dive center right next door, Kiwi Dive.

In a siestal mood, delighted to have found a quiet corner, I start by testing the hammock on the terrace. No other noise here than the murmur of the waves and the thrill of coconut palms ...