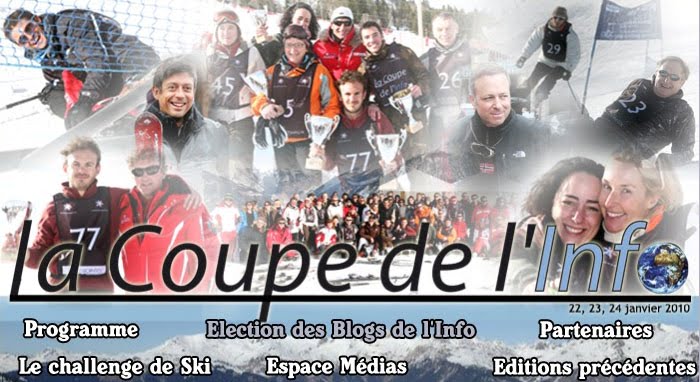 My blog has been selected for the 2010 Info Cup, in the category "Tourism". The results will be announced on January 23rd in Courchevel. Until then, the vote of Internet users counts ...

To give a boost to my Bubbles Underwater & Beyond, just two clicks. That happens here :
UPDATE : years later (this contest dates from 2009), this page has been removed. So I removed the links ... 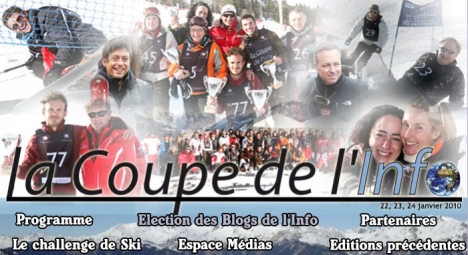 I'm a little surprised that my Bubbles Underwater & Beyond have attracted attention, since this blog is more of a personal travel journal than a tourist information site. And I did not know anything about Info Cup, before receiving the e-mail announcing my selection.

This contest focuses only on journalists' blogs, in five categories: tourism, sustainable development, high-tech, sports, automotive, economy. There is nothing special to win, except the glory and the right to ride on skis (not too much my thing, I admit). This 4th edition will be sponsored by Bernard de la Villardière.

I wonder how event organizers like this do to pick the blogs they select. Google is their friend, no doubt ... In this case, I can thank:
• Marie-Claire.fr who elected Bubbles Underwater & Beyond best travel blog ;
• Evene.fr who did it without his selection of "tourism blogs";
• Glamour whose blog has finished 2nd in the category "travel".

As a friend pointed out, by making fun of it, I'm becoming a beast to contests, with this blog ...

Still, I do not run after. And I'm not very good at self-promotion. But I will not sulk my pleasure: I am very happy that my blog is noticed and read, because it is a project that keeps me closer and closer to my heart.

What amuses me less is that I will have to indulge in the joys of the interview ... but side interviewed, for once. With video capture, via Skype presumably, since I am not from Paris (the girl who has to film the candidates organizes her interviews in Paris). All will end in a short film presenting all bloggers, which will be screened in Courchevel when the time comes. It promises.

Many thanks for all your clicks and support! ! ! It took a hair to get my Little Bubbles Elsewhere to win ...

I am especially pleased to note that we two, independent bloggers, we get close to 80% of the votes, far ahead of the other blogs of "big" media, that would have been more able to tap the clicks. Eh eh ! ! !

Small Bubbles Elsewhere exists thanks to you who read it, you who share my passion for travel and / or diving, and who make it live through your comments. Thanks again, really! ! !