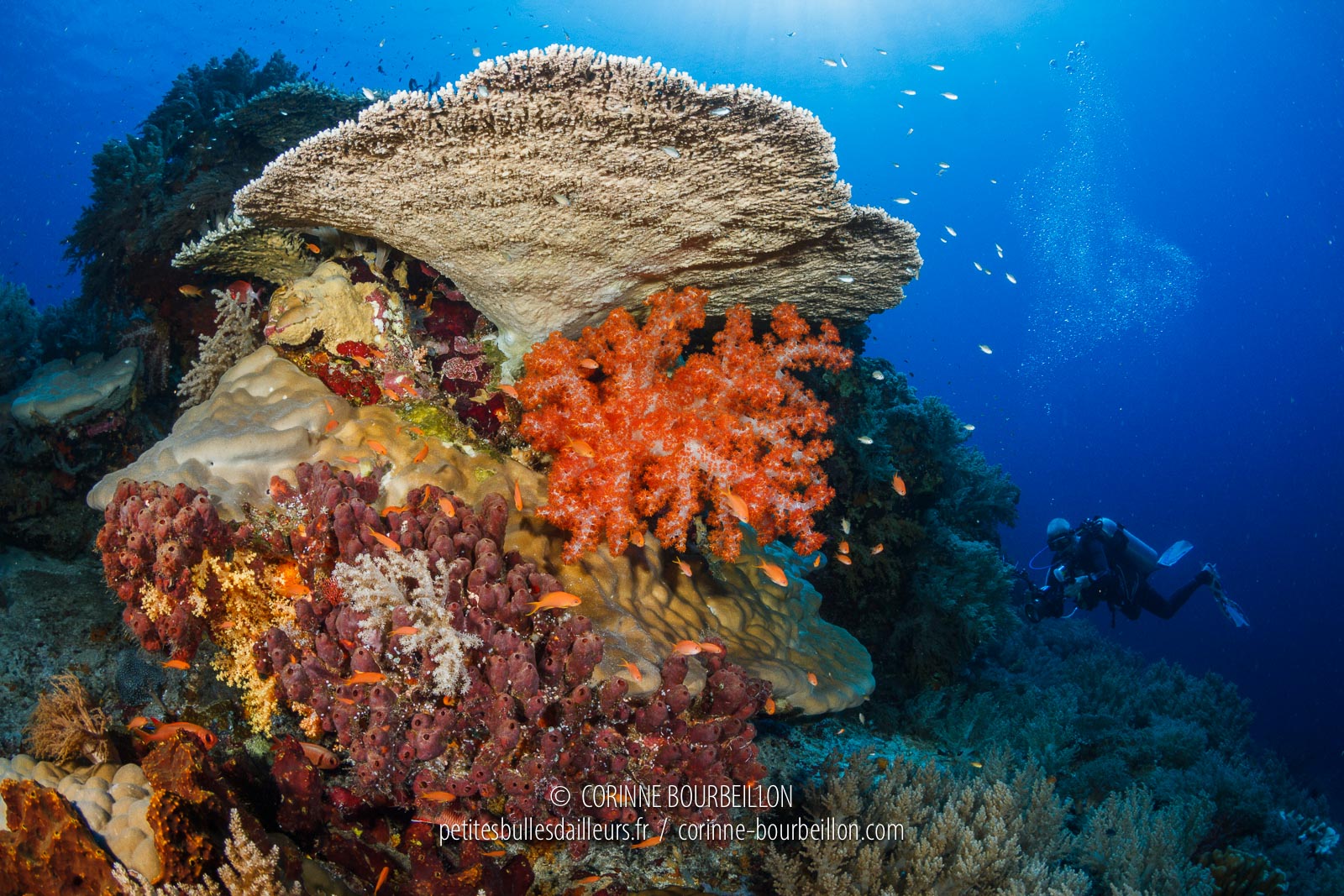 In the Philippines, the Tubbataha Nature Park is only accessible three months a year. It is an underwater jewel, with exuberant coral and abundant underwater life.

Tubbataha, the paradise of sharks

In May 2018, I finally discovered a site I had been dreaming about for a long time. Tubbataha! This exceptional diving spot is located in Philippines, in the Sulu Sea, far from all inhabited land.

It's a marine nature park nearly 100,000 hectares, the first in the Philippines. It was created in 1988 and is UNESCO World Heritage Site since 1993. Isolated in the middle of a sea regularly swept by typhoons, forbidden to the fishing boats, the reefs of Tubbataha are today splendidly preserved and swarm of life.

The profusion of sharks patrolling along the drop-offs particularly impressed and amazed me. It reminded me Sipadan, another marine sanctuary located in Malaysia, near Borneo.

I attack directly by a little videowhich I edited from the footage I shot there. It's a condensed version of only 1'30, but it gives a good idea of the underwater atmosphere in Tubbataha:

At first, we do not come back to see sharks everywhere. Then, after a few dives we get used to it, and we end up finding it totally normal & #8230; The sheer number of these sharks is really comforting, it shows in a very visible way that the conservation efforts of the park, financed for more than half by diving tourism, have a real impact.

The protected area encompasses two vast atolls and a high coral bottom called Jessie Beazley. According to the official website, scientists have identified more than 360 species of coral (it is almost half of the world's known species), more than 600 fish, 11 sharks, 13 cetaceans and a hundred of bird species & #8230; The North Atoll is also a nesting place for birds and sea turtles.

→ On the DiveMagazine site: How Tubbataha was saved

People only live in Tubbataha, apart from a dozen Filipino rangers, near a sandbank in the North Atoll, in shacks on hard stilts, supposed to withstand typhoons. The men are relieved after two months. It is the only place in the park where visitors are allowed to set foot on the ground.

Created in 2000, this Ranger Station played a decisive role in strengthening surveillance and protection of the area. The sharks owe them a lot... The rangers report illegal intrusions by fishing boats, prevent poaching, detect possible pollution, control the diving cruise ships, accompany scientific missions, inform tourists and even sell them souvenirs!

For boaters like me, the only way to discover Tubbataha's underwater world is in a diving cruise. But because of the weather that can make navigation very difficult in the Sulu Sea, the site is only accessible in dry season, three months in the year, from mid-March to mid-June.

The boats, specially designed for a clientele of divers, leave from Puerto Princesaon the island of Palawan, about 180 km away. The cruises are generally organized for 6D/7N: the crossing lasts about ten hours and therefore takes a day or a night to go and return, leaving five days on site. On this type of cruise, the program is simple: "Dive, eat, sleep and repeat. » Diving, eating, sleeping and starting over ...

The usual rhythm is 3 to 4 dives per day. We are in the water from 7am. But it's not difficult at all to get up early, when it's to go see sharks!!!

I embarked for this new underwater adventure thanks to my friend Carol, who lives in the Philippines. She holds with her husband Jérôme the nice little eco-friendly dive center Equation Dive Shop in Panglao-Bohol and has decided to start organizing "organic and photo" themed diving cruises. When she told me that she was bringing on board the marine biologist Steven Weinberg, to give short lectures to the group in the evening, after the dives, I did not resist the temptation & #8230; & #x1f61c;

Less than a dozen cruise ships hold the permit to take tourists to Tubbataha during the famous three-month weather window. Carol's choice fell on the Discovery Adventure, a large and very comfortable ship, which can accommodate about twenty divers.

I don't have a point of comparison, I don't know the other boats operating in the area, but I found ours very good. Lovely and competent crew, well-oiled organisation, copious and tasty meals, cabins perhaps a little impersonal but very spacious, hot shower with good pressure... Just a small problem with the air conditioning at first in some cabins, but we've been provided with fans while waiting for it to be repaired. And then this detail, essential for me: in the large air-conditioned common room, there are for underwater photographers large tables with power strips available, to disassemble the boxes and recharge the batteries.

FEEL LIKE GOING SNORKELING? Everyone was so happy, Carol decided to do it again. From now on, she plans to hold an annual an organic and photo diving cruise. For the next one (when the Covid-19 pandemic will no longer prevent travel), the sponsor on board should be the oceanographer François Sarano. Do not hesitate to contact her directly to get all the details and infos : carol@equation.asia

GOOD TO KNOW ABOUT AIR TRANSFERS: opt for an international flight that lands directly in Cebu rather than Manila can be worth it, before taking the domestic flight to Puerto Princesa (Palawan). With a single terminal, Cebu airport is indeed much smaller than Manila It's much faster for immigration formalities, baggage claim and transfers. This saves you a lot of hassle on arrival or on the way back, including the monster traffic jams in Manila at certain times of the day, whether it's to change terminals or to spend a night in transit. There is a hotel just across the street from Cebu airport, the Waterfrontif you have to stay overnight (just the street to cross).

The wonders of Tubbataha

Underwater is the wonder... ???? We discover coral reefs as far as the eye can see, spectacular drop-offs where gigantic sea fans and huge barrel sponges cling.

At the whim of the currents, besides sharks and the usual coral fauna in these latitudes, it is not uncommon to see schools of trevallies and barracudas, turtles and napoleons, large humpback parrots ...

From the very first day, we have been incredibly lucky: our prize draw meeting a whale shark, near the drop of Jessie Beazley Reef ... I told in the previous post It was Steven Weinberg's first whale shark in sixty years of diving!

But in Tubbataha, the current almost systematically drift dives, sometimes sporty, which does not facilitate things when we want to make images. For underwater photographers, this is quite a challenge & #8230; For the preservation of the site, it is strictly forbidden to touch anything, it is not even allowed to put even a finger in the sand to stabilize.

It is therefore essential to perfectly control buoyancywithout even thinking about it. It's not really a destination that I would recommend for novice divers. For your own safety, better to have a minimum of experience, because some currents sometimes turn into "washing machine" and when you are caught in it, it's not a piece of cake (some of us have had the unpleasant experience).

A minimum of 50 dives + Level 2 or Advanced Open Water is recommended by most diving liveaboards in Tubbataha. For my part, I think that as for Komodo, a more solid experience of about 100 dives is preferable, and that it is also a good thing to have already been in the current underwater.

As the trip progressed, all the crews of the boat managed to see at least one whale shark and an manta ray. These two huge fish are a bit like the stars of the park, we hope very strongly to see each time we go to the water. The luckiest of us, who have managed to cross several times the road of a big beast, are of course a pleasure to taunt others back on the boat, photos or videos in support.

But what is perhaps most striking in the end is the coral cover, dense and intact, unfolding endlessly under the palm leaves ... The splendor of coral on such a vast expanse is absolutely fascinating.

As always, the pictures are worth a thousand words ... I let you discover below a selection of photos brought back from this extraordinary diving cruise, in tribute to the beauty of Tubbataha.