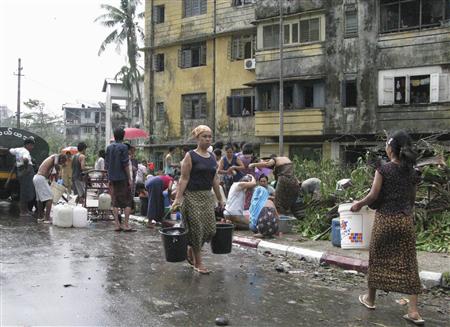 After the protests of Buddhist monks against the Burmese military dictatorship, in September and October 2007, the West became interested in Burma, because of a terrible natural disaster. The passage of Cyclone Nargislast weekend could have claimed more than 60,000 lives.

The provisional official record shows more than 22,000 dead and 42,000 missing. We are talking about millions of people affected.

Reuters photo: While waiting for international aid, the Burmese are trying to survive in a country devastated by Cyclone Nargis.

I have visited many countries in Southeast Asia, but I have never been to Burma, renamed Myanmar by the ruling military. The country is border with Thailand, but can only be entered by air, landing in Yangon, the capital. The regime has closed the borders.

A dozen years ago, I was interning at Stock Editions. I then worked on a book of interviews, led by a Buddhist American, Alan Clements, with Aung San Suu Kyi. The book was published in 1996 (it has been reissued under the title My Burma last March, at Hachette, in the Pluriel collection). The Burmese opposition had received the Nobel Peace Prize five years earlier.

I discovered at the time the fight of this brave woman and the tragedy of the Burmese people. Unfortunately, the situation has not changed much since.

Below, some interesting links, to better understand what is happening in Burma:
" The Irrawaddy - the Burmese magazine in exile
" Burma, my heart bleeds - a blog rich in links and infos
" Burma, dreams under surveillance - a project and a book published by Autrement
" Info-Burma - French association
" Actions Burma - Belgian association