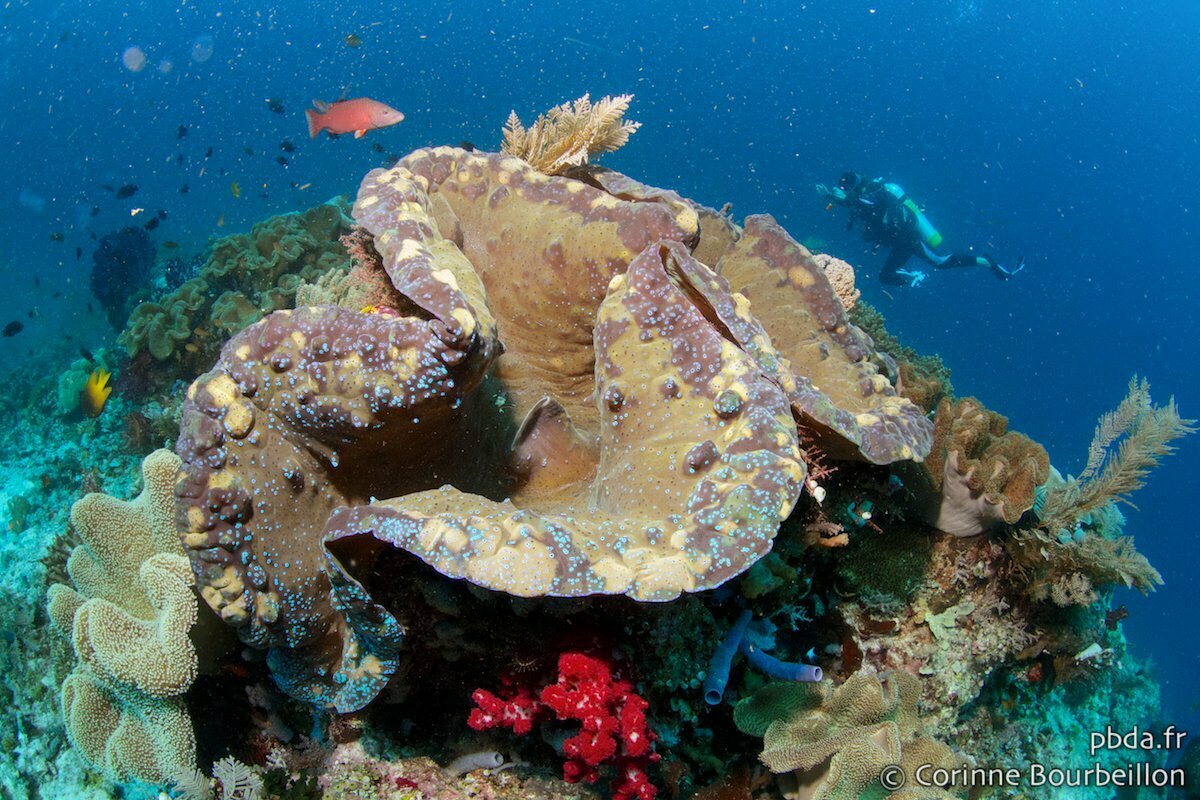 The biggest shellfish in the world

This shell is a monster. It is not for nothing that it is called "giant holy water font". I have never seen one as big as Raja Ampat.

The giant clams of Mioskon

Ah, Indonesia ... I can not stop raving about the surprises that each new trip there is for me.

In July 2012, back in the archipelago of Raja Ampat, everything continues to amaze me. This is my second time here (see the first: in March 2012), but impossible to be jaded. 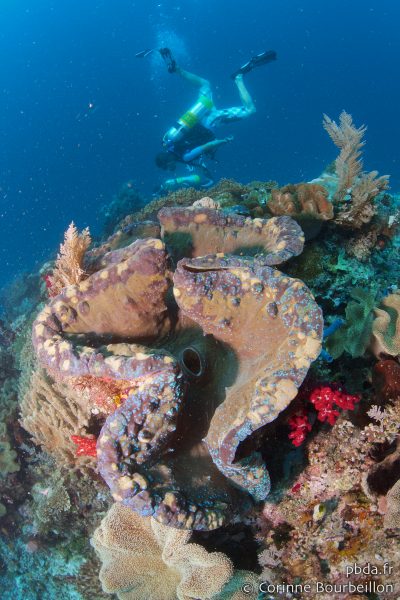 The small island of Mioskon, with its unusual cloud of bats above her cute white sand beach, conquered me. Underwater, another curiosity awaits me: the largest shellfish in the world.

My friends Jimmy and Julia, from Sorido Bay Resort, who accompany me for this new dive, warned me: "Prepare your camera", they tell me in the Anglo-Saxon way (the term "camera" means everything that captures the image, camera as camera). "There are beautiful holy water! "

The giant clam, also called giant tridacne, is a huge shell, which can measure up to 1.50 meters long and exceed 200 kilos. It is the largest bivalve mollusc.

Yes, it is eaten - the flesh of the shell is edible - but it is forbidden. The species, threatened, is protected. It is often seen in the warm seas of the Indo-Pacific zone.

Before this trip, it's probably at Pulau Weh, at the other end of Indonesia, and also in Bali on the side ofAmed, that I had to see the biggest ones. But the. Frankly. It is enooorme! 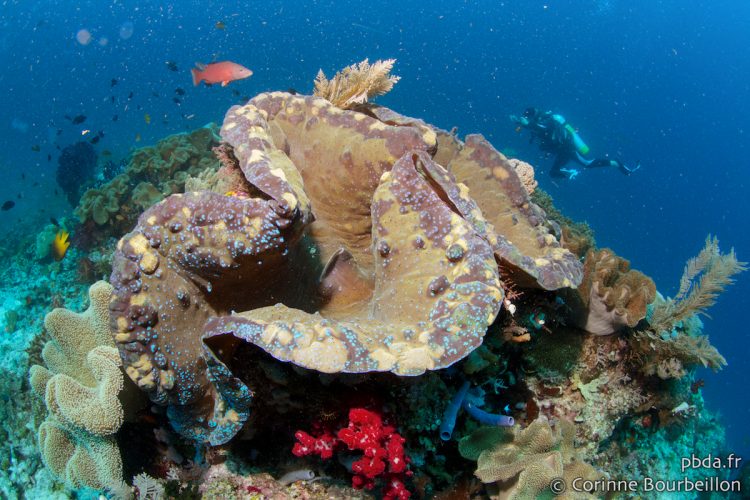 As always, in Raja Ampat, the "usual" tropical fauna is one step above anything else in Indonesia.

On the site of Mioskon, there is a very big font, really bigger than the others. Its yellow-brown flesh palpitates, overflowing into large, fleshy, purplish lips over the shell. All in the middle of the coral teeming with life, as always. 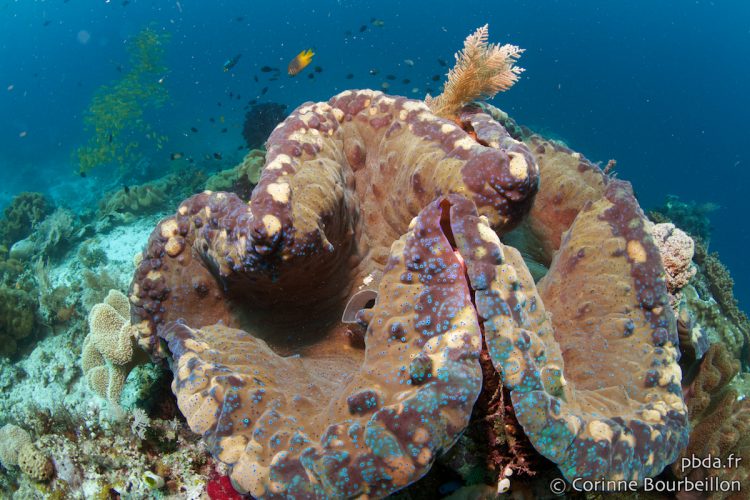 Update of July 2016: I returned to Raja Ampat several years after this trip in July 2012. I went back to Mioskon, in particular in January 2015then in november 2015impatient, every time, to find the big holy water! Unfortunately, in July 2016, during a new trip to Raja Ampat, I discovered, stupefied, that this magnificent and spectacular shell was dead. Missing, the purple flesh throbbing purple ... Underwater, there remains today Mioskon's holy water stoup that a huge shell gray and empty. Nobody could tell me what could have happened to him (illness, fishing). It made me a little sad, the disappearance of this giant seashell ... I consoled myself with other holy clams, on other sites, including that of Chicken Reef. I will show you the pictures in a future article.

In Mioskon, when one is tired of contemplating the holy water font, one has good chances to surprise wobbegongs, these funny bearded and rugged sharks that do not look like the stuff you see in movies.

This one "took off" from the reef without warning. I did not see him. I scared him and he ran away. But it went straight to me and I just had time to trigger my "camera", quickly. 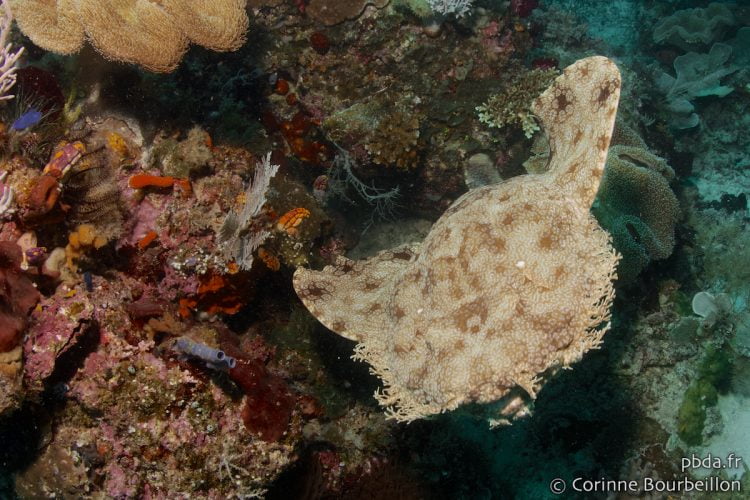 Fortunately, I also have with me some cooperative human models, who deign to stop for a moment above the schools of fish ... 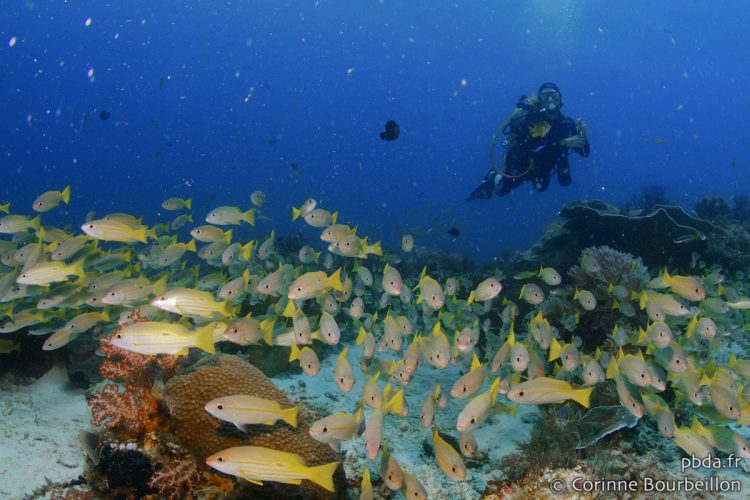 In short, there is something to do, with all the pigeon that drips from everywhere. 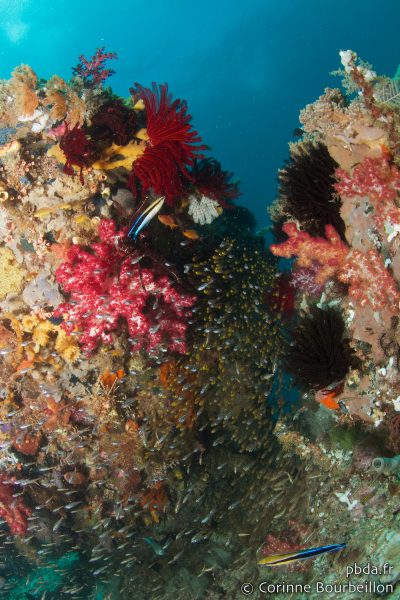 Profusion. It's always the word that comes to me to talk about Raja Ampat.

Even the most "mundane" site here is extraordinary because of the abundance and variety of wildlife it encounters, by the colors and density of the coral.

No, really, nowhere else in Indonesia - except maybe some sites in Komodo - neither in Malaysia nor in Thailand, I had this sensation of incredible profusion under water.

"Raja Ampat, where all the fishes live", like to say Max Ammer, pioneer of diving in the archipelago. He's not wrong. All fish live here!

At the end of the dive, at a shallow depth, I stabilize myself in front of an imposing pink anemone, which houses the "usual" clownfish. I watch their ride for a moment. There is a small family, frightened by my arrival, huddling under the protective tentacles of his "house". It's been a long time that I have not photographed "nemos" ... I tend to disdain them, I have stored too much in my hard drives.

But this time, the beautiful velvety purple of the anemone tempts me. Come on, a little last for the road. 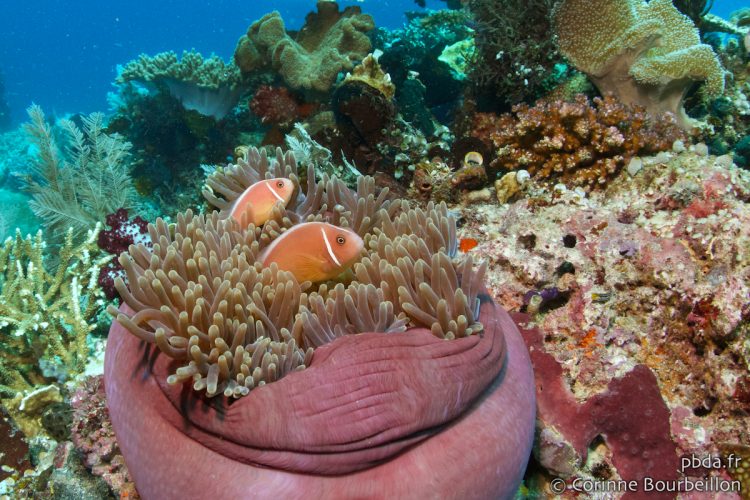 → To see all the articles on my dives in Raja Ampat: click here!