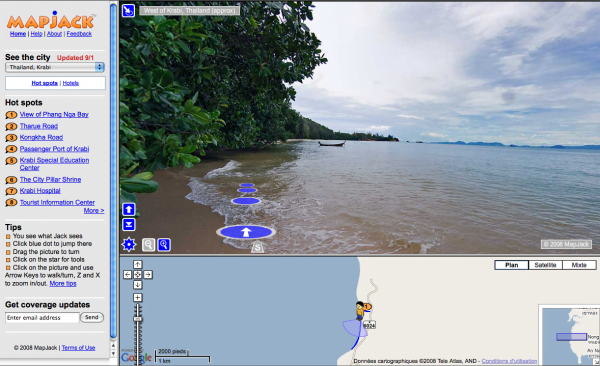 I love the geographic tools of the web. After Google Earth and his Google MapsI'm falling for MapJack and its 360 ° subjective panoramas (much like the one I presented to you in the previous post). Nothing like morale, between two trips, to afford a virtual trip to the end of the world! 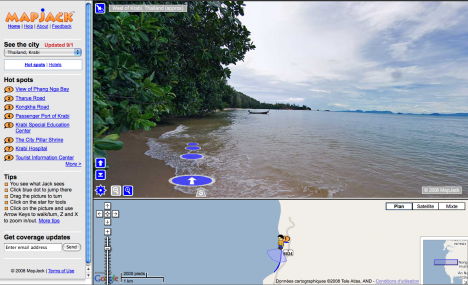 But it's quite enjoyable to have just one click to walk the beaches of Phuket or take a look at the temples of Chiang Mai. We see them as we would see them walking by there ...

On the same principle, there is of course Google Street View, but the rendering is less spectacular. Especially since Thailand is not yet in the proposed walks, which are currently only American, Australian, Japanese and ... French! But on both services, supply should soon expand. We even saw the Google Car in Rennes, three months ago !

There, I just made a virtual trip to Thailand, just to forget the gray rain that falls on Rennes today. But if I believe this dispatch found today on the Bangkok Post, the weather is also rotten on the Thai capital:

Rain, hail bombarding PAD [Sept. 5, 2008]
(BangkokPost.com) - Strong wind and heavy rain with hail halted the mass anti-government demonstration of the People's Alliance for Democracy (PAD) at Government House on Friday evening.
Many of the protesters were soaked up in the past, and many areas of the muddy government compound were inundated. The group's key members had to postpone their anti-government speeches.
The unconditional weather forced people demonstrating outside Government House.
He hail on the opponents of the Prime Minister! It's finally the bad weather that will have managed to dislodge the protesters ...
😯